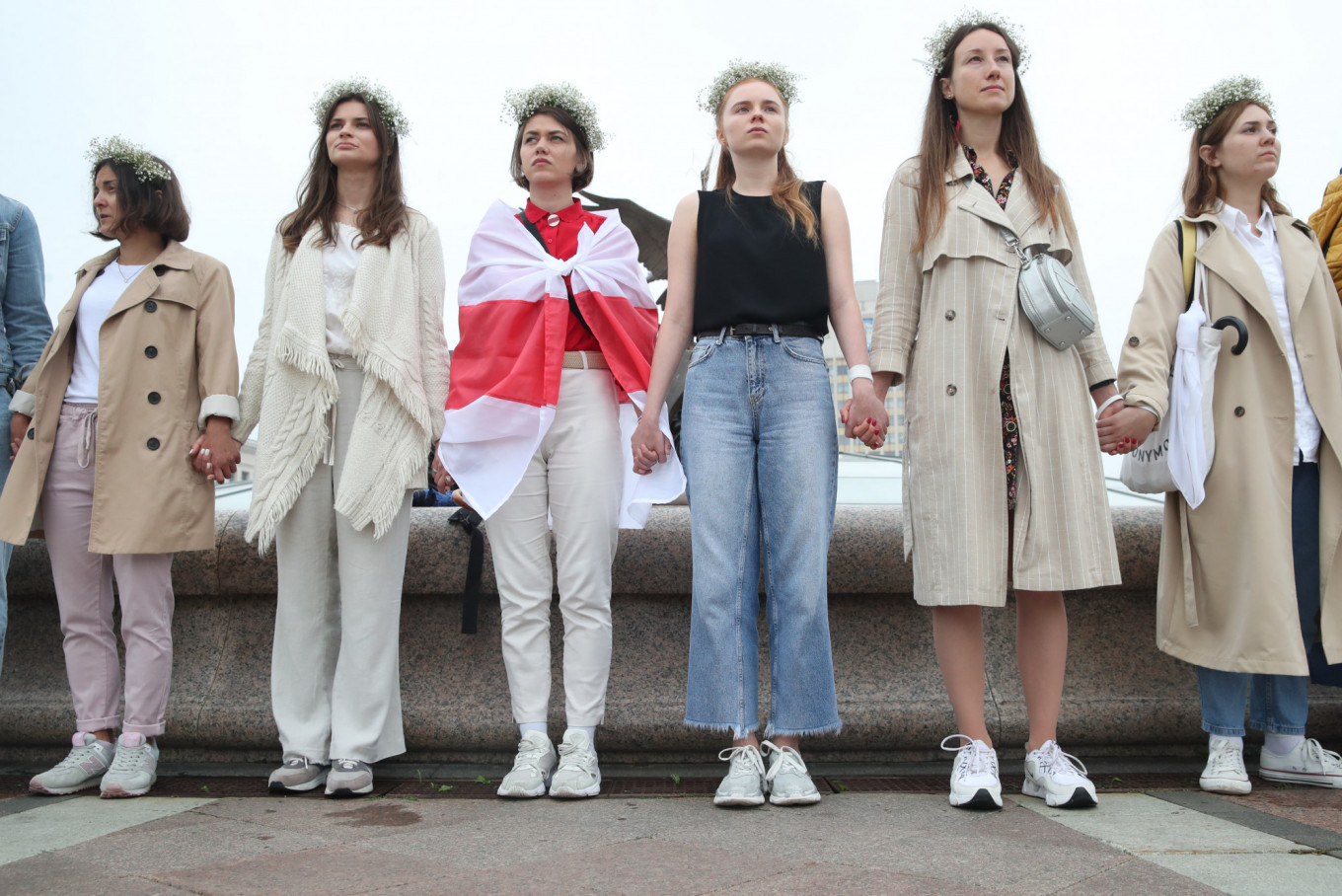 Tens of thousands of demonstrators massed in central Minsk on Sunday to demand the resignation of Belarusian President Alexander Lukashenko, who flew over the scene of the banned protest in a helicopter and called the marchers “rats.”

The authoritarian leader, shown later clutching an automatic rifle upon landing at his central Minsk residence, has ordered the military into full combat readiness in the face of the biggest challenge to his 26-year rule of the ex-Soviet state.

“They fled like rats,” Lukashenko said in a presidential video taken during the evening helicopter flight with his 15-year-old son Nikolai after the protest had largely broken up.

He has previously dispatched his notorious riot police to disperse rallies that erupted after he claimed a sixth term with 80% of the vote in an election two weeks ago that the opposition says was rigged.

But with rain on Sunday evening, the protesters appeared to break up voluntarily without any clashes with the riot police, the latest of many peaceful showdowns.

Crowds of protesters carrying the red-and-white flag of the opposition earlier flooded Independence Square and marched through the capital chanting “freedom” and “we will not forget, we will not forgive” as passing cars honked in support.

The defense ministry said it would intervene to protect “sacred” World War II memorials and several metro stations in Minsk were closed.

Opposition-leaning media said more than 100,000 protesters had convened in the capital for the second Sunday in a row and smaller demonstrations were also reported in provincial cities.

In solidarity, demonstrators in neighboring Lithuania were forming a human chain from Vilnius to the Belarus border, three decades after residents of the Baltic states joined hands and linked their capital cities to protest Soviet rule.

The European Union has rejected the election results and vowed to sanction Belarusians responsible for ballot fraud and a police crackdown that has seen nearly 7,000 people arrested, with allegations of gruesome torture and abuse in police custody.

Top EU diplomat Josep Borrell warned that Belarus should not be allowed to become a “second Ukraine” and said it was necessary to deal with the 65-year-old Lukashenko, Europe’s longest serving leader.

Outgoing OSCE chairman Edi Rama also offered to mediate a resolution to the crisis, in a letter obtained by AFP to his successor Swedish Foreign Minister Ann Linde.

The man branded “Europe’s last dictator” has brushed aside the calls to go, dismissed the possibility of holding a new vote and instructed his security services to quell unrest and secure the borders.

A video released by the presidency showed Lukashenko holding an automatic rifle and wearing body armor when the touring helicopter brought him back to his official residence.

AFP photographs showed a number of demonstrators gathered in the evening opposite law enforcement officers guarding his residence known as Independence Palace, but correspondents said they massed there only briefly.

Lukashenko’s judiciary opened a criminal investigation into the opposition’s Coordination Council that is seeking new elections and the peaceful transition of power, after he said opponents wanted to “seize power.”

The former collective farm boss ordered the military into full combat readiness during an army inspection near the border with the EU on Saturday and warned about NATO troop “stirrings” in neighboring countries.

“The fatherland is now in danger. We cannot joke,” Lukashenko said.

Lithuania’s President Gitanas Nauseda said Lukashenko was trying to “divert attention” from the unrest at home, while NATO dismissed the claims as baseless.

In an interview with AFP ahead of Saturday’s demonstrations, she urged protesters to continue to exert pressure, saying it was “important to continue to be united in the struggle for the rights.”

The authorities have to understand “we are not a protest movement… we are a majority and we will not step away. We are not afraid of them any more.”

Lukashenko’s opponents have organized strikes and the largest protests in the country’s recent history, but fewer workers at state-run factories — usually a bastion of support for Lukashenko — have continued to strike.

Activists have cited pressure from the authorities, and Lukashenko has threatened from Monday to shut down production lines where workers have put down their tools.

Staff at state-run media outlets have also staged walkouts and Lukashenko admitted this week that journalists from Russia had been flown in to replace them.

Russia, his powerful ally, has warned European leaders against interfering in Belarus and the Kremlin has said it would intervene if necessary.

US Deputy Secretary of State Stephen Biegun will visit Lithuania as part of a trip next week that will also include a stop in Russia for talks on the election fallout.

Lukashenko’s army inspection Saturday came ahead of large-scale military exercises planned on the border with the European Union between Aug. 28 and 31.