On December 12, ROSATOM organized a workshop on public acceptance of nuclear energy. The event took place in Mersin Museum of Archeology. The workshop welcomed a wide audience of teachers, students, representatives of high educational and environmental institutions, and NGOs.

The workshop included presentations given by representatives of ROSATOM enterprises, such as regional center in MENA region, Rusatom Energy International (majority shareholder of Akkuyu Nuclear JSC, which implements Akkuyu NPP construction project in Mersin Province), as well as speakers from MEPhI, the Nuclear Safety Institute of the Russian Academy of Sciences (IBRAE RAN) and Hacettepe University. The workshop covered different aspects of nuclear energy, its impact on the social and economic development of the region, safety and environmental issues, radiation, common myths and concern about NPPs. 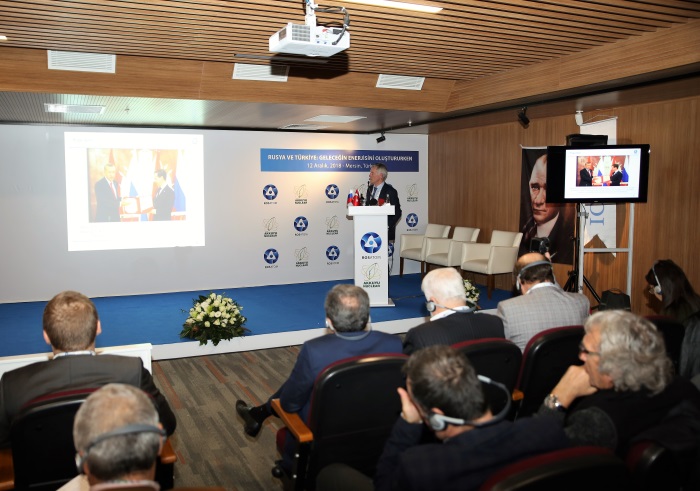 In his welcome speech, Alexander Voronkov, director general of ROSATOM Regional Center in the Middle East and North Africa region, shared with the audience key facts and historical background of ROSATOM, its global presence and experience in nuclear sector. He stressed it out that Russian nuclear industry has more than 70 years of experience in nuclear sphere. “Being the pioneer of nuclear power sector with the world first NPP built in Obninsk on 1954 we became one of the most experienced companies in the world nuclear industry offering nowadays cutting-edge solutions and technologies worldwide. VVER-1200 type of reactor which is base for Akkuyu NPP project is one of the safest and technologically advanced. This is 3+ generation reactor technology which includes all passive and active safety systems that fully comply with modern international safety and security standards and already implemented in Russia”, he noted.

Explaining basic facts about nuclear energy and main principles of NPP operation Dr. Sule Ergun, Assistant Professor in Hacettepe University at Department of Nuclear Energy Engineering, stressed it out there are 454 nuclear power reactors in the world and nuclear energy is beneficial for many reasons. Ergun said: “The safety of nuclear power plants is provided by internationally approved safety systems. There are many benefits of NPPs to Turkey. The continuous and affordable electricity, economic recovery, combating the climate change, decrease in the external dependence on energy are some of the important ones. In fact radiation level in the area of NPP is lower than the natural level”.

Mikhail Cherdantsev, Director of Department of Project Engineering in Rusatom Energy International: “We work on the project with all of our strength and now it is running according to schedule. Akkuyu NPP consists of 4 units and will provide a total capacity of 4800 MW of electrical energy. The permission for Akkuyu land plot was issued by Turkish regulator in 1976, and in 2011 the Turkish Government and the regulatory bodies confirmed the decision by allocating the land for the NPP construction project. The decision was made upon thorough consideration of seismic, environmental, and other natural aspects. This is the region of not a high seismic risk of an earthquake, however, as we talk of the NPP project, the design is done to safely withstand a magnitude-9 earthquake. Additionally, no sever risks related with possible snowing conditions were detected, however, the design is resistant to such conditions, too, as well as it safely ensures high level protection against winds,  storms, and hurricanes. Climate specifics of the Mediterranean were considered to the full extent, and beyond, any possible rare case scenarios that may occur with negligibly low probability were considered in the NPP design, too.”

Speakers from MEPhI and IBRAE RAN clarified social concerns and disproved myths about nuclear energy and Akkuyu Nuclear Power Plant, while they explained the environmental and radiation matters in general. Prof. Fomin of MEPhI emphasized it that modern nuclear power plants are safe for the environment and even more, because NPPs are green and preventCO2 emissions they are crucial for unique ecosystems protection and preservation. He explained that the radiation level around the plant is below natural radiation level annual average and it doesn’t affect the health. He also highlighted that NPPs are located close with many touristic cities in such countries like France and Spain, but it doesn’t affect tourism, health and other issues.

After the presentations, the Q&A session took place where all who interested could ask questions related to the topics of the workshop.

At the end of the event, special screening of “Wild Edens: Turkey” was organized. Wild Edens project is a new documentary series that highlights the issue of climate change. The project’s main goal is to raise the international community attention to climate change by emphasizing the need for a global transition to clean and carbon-free energy. The film focuses on the flora and fauna of   one-of-a-kind natural habitats of Turkey, highlights the unique and delicate habitat of the Kars Wetland, the Caucasus, and the Mediterranean Sea. Brought to you by Rosatom, it will be broadcast by National Geographic starting this December.

ROSATOM is the only company in the world to offer integrated clean energy solutions across the nuclear supply chain and beyond, including the design, build and operation of nuclear power stations, uranium mining, conversion and enrichment, the supply of nuclear fuel, decommissioning, spent fuel storage and transportation and safe nuclear waste disposal. With seventy years’ continuous experience, the company is the world leader in high-performance solutions for all kinds of nuclear power plants. It is also working in the segments of wind generation, nuclear medicine, energy storage and other. Headquartered in Moscow, the company brings together over 300 enterprises and organizations and over 250,000 employees. Globally, the company has the second biggest uranium reserves, has 40% of the world’s enrichment market and is the world’s biggest builder of the latest generation nuclear power stations and US$133 billion 10-years export order book.

The main goal of Wild Edens project is to attract the attention of the international community to climate change and the need for a global transition to clean and carbon-free energy. The filming and broadcasting on National Geographic Channel of unique documentaries about wilderness areas with animals and plants in danger of extinction due to global climate change will be the culmination of the project. The locations for filming have been chosen to show the extraordinary beauty of landscapes, and at the same time to emphasize that these unique places and their inhabitants, rare species of animals, birds, the unique natural environment, forest, water bodies and plants, are in danger of extinction. Off the Fence, an independent production company, produced Wild Edens documentary series. Executive producers are Ellen Windemouth and Allison Bean. Producer and Director is Andrew Zikking.