The first Russian diamonds deposit was discovered only in 1829 in Ural area. However really big fields in this region were not found – for 28 years was produced only sixty carats of diamonds. After unsuccessful searches in the Urals, geologists undertook expeditions to the Siberia. In the mid-50’s the richest diamond deposits of Yakutia were found. It happened in 1954: a talented geologist Larissa Popugaeva found Russia’s first kimberlitic pipe named Zarnitsa (sheet lightning). Further Russian diamond mines were discovered; they are Mir (peace), Udachnaya (successful), Iubileynaya (anniversary), etc. Russia has joined the leaders of the diamond market, which until then were African countries. The era of Russian industrial production of Russian diamonds was proclaimed and Yakutia became the Russian diamonds capital. In the early nineties was opened third Russian diamond region – in the Arkhangelsk region. Almost all its diamonds Russia gets from the field in the Yakutia. Thus, Russia’s diamond reserves are concentrated in the following locations:

Diamond placers in the Krasnovishersky region in Ural – 0.2%

In the Soviet Union, Russian diamonds cut factories began to build shortly after the discovery of diamond deposits in Yakutia. The first Crystal brand factory was built at the Smolensk in 1963 and remains the largest Russian diamonds cut factory. The factory Cristal in Moscow was put into operation in 1971. As a result, there were seven factories in the Soviet Union, not counting the Crystal, which produced Russian vodka. In 1977, specifications for diamonds cut took effect for the entire industry of Soviet Union, which put forward strict requirements for Russian diamonds cutting and polishing. Through Smolensk Production Association and other Cristal diamond’s factories the term Russian cut has entered in the global diamond industry, which means a higher quality cut stone. Gradually, the world diamond market accepted the concept of Russian Cut and the market began to pay a premium for the quality of these stones. The commercial cutting in the US diamond market was low quality compare to Russian cut of Russian diamonds. This led to positioning by many dealers that other stones were faceted in Russia, however Russia has had nothing to do with that. Any well-cut stone could be called «Russian cut».Is the Russian cut a synonym for high quality diamond? The answer boils down to the fact that this phrase became a term trading and is used when selling the same manner as other brands and slogans: to force the buyer to believe and to buy.

In nowadays in Russia, the diamond industry is represented mainly by Alrosa, which produces 97% of all Russian diamonds. It not only supplies the diamonds on the world market, but also ensures the needs of the domestic jewelry industry, working closely with the Smolensk diamond factory Crystal, the country’s largest company by selling high-quality Russian diamonds. Also, many Russian diamonds and jewelry factories work with the company Alrosa. They are Moscow Experimental Jewelry Factory, Ural Jewelers, Russian gems. The leader of the Russian diamond industry and at the same time the world second-largest diamond mining company, Alrosa sells its products in processed form – Yakut diamonds are cut by a lapidary plant Sahayuvelir. Before the Alrosa, De Beers reigned unchallenged in the world diamond industry, by appointing their own prices for diamonds. Now, De Beers monopoly is over, it has to be reckoned with a Russian company.

Natural diamonds weighing a hundred carats are always a sensation. There are quite a bit copies in a world. Until the second half of the nineteenth century large diamonds almost do not come across. These gems were the exclusive prerogative of kings, emperors and other authority people. Often, bloody wars were unleashed for the sake of these beautiful crystals, killed thousands of people. Let’s talk about the most expensive diamonds in possession of Russian Federation. Anyone who thinks that rappers popularized bling should check out the 190-carat diamond belonging to Czarina Catherine the Great – diamond Orlov, aka Derianor, Amsterdam, and Lazarev. Another phenomenal diamond is Shah Diamond. You can see both of them in Kremlin Diamond Fund.

The story the one of the most famous diamonds, named after the Catherine II favorite Count Orlov was not written until now. There are lots of rumors, assumptions, and pieces of memories about diamond Orlov traveling. Let’s try to trace the diamond inscribed with the date of its finding, based on all available sources. 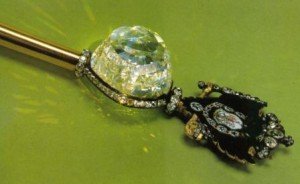 The Orlov Diamond has a well-known “brother” a Shah Diamond – they were found in the same place in India at Golconda mines. Its first owner was Shah Jehan-shah – a descendant of the Great Mogul dynasty. The huge stone weighing 400 carats was sent to the courtier jeweler for the artistic cutting.

Unfortunately, work on the exterior stone has reduced diamond’s weight by more than two times. The faceted Orlov began to weigh 189.62 carats, the weight it arrived to our days. At this point in history there first doubts arose. The Great Mogul diamond, which was also owned by Jahan Shah, and which was subsequently lost, is often associated with Orlov diamond. It is believed that these two diamonds, in fact, one and the same stone. Is Truth is unknown, so we’ll move on through the maze of history.

After changing a few owners, the Orlov diamond returned back home to India. There it became a part of Buddhist temple decoration – a diamond eye of a deity statue. If the temple’s novices treated the diamond as an everyday thing, the guests of the country looked at temple’s decorations with envious glances. One enterprising young man, a soldier Frenchman, so wanted to steal the diamond, so he pretended to be a novice, changed his faith and began working in the temple. One day the theft took place. The young man safely reached port and sold it to one of the diamond dealers. The diamond Orlov began his journey to Russia.

On a trading ship the diamond reached Amsterdam. There it was purchased by a merchant of Armenian origin, Gregory Safras. Count Orlov came to him to buy a diamond as a gift to Catherine the Great.

The reason for buying incredibly expensive diamond is also not clear. If you believe the romantic version, in this case the Count Orlov made such a generous gift to prove to the Empress’s disposition. If to stick to the less beautiful, but more probable version, the purchase of diamond was initiated by Catherine the Great herself. She was fascinated by the diamond, but she did dare to buy it openly and on the Russian treasury money, she feared of censure from others. Therefore, Count Orlov, played his minor role, the Empress graciously accepted the gift, and the diamond became a worthy place in the royal scepter. Since that time, the Orlov Diamond has not changed its place of residence. Count Orlov and Catherine the Great love story spread throughout the Europe. Many famous people, who came on business to Russia, admired this gorgeous gift.

Diamond is known not only for its size but also the quality of cut. Since the time of the Indian masters, the diamond had not other cut and we can see today the professionalism of the ancient goldsmith. Orlov diamond absolutely clear and has mild green shade. The world famous diamond Orlov is now displayed the Kremlin’s Diamond Fund.

The history of Shah is written right on this diamond. The Shah weights of 88.7 carats and it was found in India at the end of the sixteen century. The first owner of the diamond was Burhan Nizam Shah in 1591, who ruled in Ahmednagar, however in 1595 it was captured by the Great Moguls. In 1665, traveler Tavernier saw this stone in the Mogul Aureng Zeb palace. In 1665, traveler Tavernier saw this stone in the palace Mogul Aureng Zeb. In the fall of the Mogul state diamond switched the owner and passed to Nadir Shah of Persia possession. 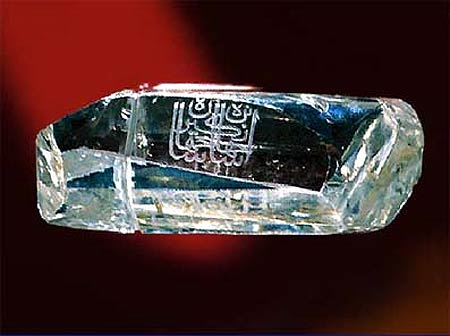 In 1824, as engraved in stone, it was owned by a Persian Fatah-Ali Shah. But in 1829, Prince Khozrev-Mirza brought the diamond to the Russian tsar as a sign of peace and in recompense for the massacred of the Russian ambassador along with the whole Russian embassy in Tehran. Russian ambassador was Alexander Griboyedov, a Russian diplomat, playwright, poet, composer and one of my favorite playwrights.

Diamond Shah was kept in the basement vault of the Winter Palace in Saint Petersburg. After the Russian Revolution the Shah was transported to Moscow along with other treasure, to the Kremlin Armory.