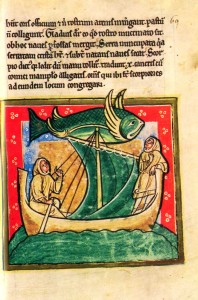 Serra — flying fish /serra/ 10.6×9.5 cm
The tale of the flying saw-fish is one of the few tales about fishes in the original “Physiologus”. The sawfish is mentioned in the chapter about sea pigs and it has a special chapter based on the early versions of the Greek “Physiologus”. This confusion is caused by the superimposition of nonconcurrent texts. Various Latin versions of “Physiologus” contain different symbolic interpretations of the saw-fish. According to version “C”, a ship, a symbol of the Holy Church, is carried by the sails of faith through the sea, an allegory of the world. Serra /saw-fish/ is the Devil who had disguised himself as an angel to allure and captivate God’s people on board the ship. Version “B” says that the ship symbolizes the righteous who sailed through the sea of life and the saw-fish symbolizes a man determined to devote himself to righteous life, who, nevertheless, yielded to mundane temptations, which brought him to Hell. The authors of the bestiary chose this version. Serra is a sea-monster with enormous fins. Upon seeing a ship sailing in the sea, it jumped out and soared, her wings like the sails, but soon was exhausted and dived back into the sea.
The Latin bestiaries often give a different interpretation of this tale; according to it the ship symbolizes Apostles and Prophets,— and the fish signifies a man who failed to go through a severe test of fasting. Isidor /XII.VI.16/ shares the symbolic interpretation of version “C”, while Pseudo-Hugh /11.22/ — that of version “B”. Possibly Isidore in his description of the fish proceeded from Pliny’s story about the sword-fish /XXXII.2.6./ and the flying dolphins /IX.8.7—8/. Aristotle writes about fishes jumping out of water /IX.631 a 21/. Philippe de Thaun /1681 — 1702/ on the basis of the text by Isidore or that of version “C” associates the saw-fish with the Devil, while Guillaume le Clerc /399—420/, proceeding from version “B”, sees in it the image of a sinner. Pierre of Beauvais /11.121/ has a lengthy story about it and Albert the Great /XXIV.1.11/ mentions the fish’s eagerness to compete with ships. In the Saint Petersburg Bestiary a short text about dolphins borrowed from Isidore /XII.VII.II/ follows the story of a saw-fish.
The miniature emphasises the didactical meaning of this fantastic scene: an enormous fish with wing-shaped fins is flying over a boat in which a man with an oar is pointing at the saw-fish in a moralizing gesture while his companion on the bow is contemplating this scene as if drawing a lesson from it.