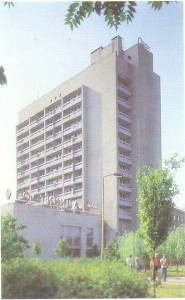 The fathers of Odessa chose this name for this lovely spot on the coast hoping it would help make it a success as a holiday resort. They were not mistaken. Private villas, restaurants and other holiday facilities were soon built. After the revolution it was developed as a health resort and is now one of the most popular holiday districts.

The Arkadiya resort includes the entire coastal strip from the Otrada (on the level of the October Revolution Square), Arkadiya proper, the area around Proletarsky Bulvar (Proletarsky Boulevard), and the holiday homes along Shevchenko Avenue.

Arkadiya is a climatic resort. There are about twenty sanatoria treating diseases of the cardio-vascular system, nervous system, respiratory diseases, and metabolism. 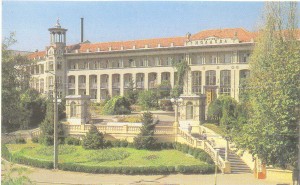 Right after Ploshchad Desyatogo Aprelya in large grounds of its own stands the sanatorium Druzhba for people with cardio-vascular trouble.

Further on, on the right-hand side, is the hotel Arkadiya which can accommodate two hundred and forty visitors, the new multistorey hotel Tourist, which caters for four hundred, the Molodtsov-Badayev tourist hotel, the Melodiya boarding-house, and the sanatorium Moldova which caters for the people from the neighbouring Soviet republic of Moldavia.

On the right-hand side of the street, following the intersection with Ulitsa Posmitnogo (Posmitny St.) is the Primorye sanatorium built in 1953.

Meanwhile a big new tourist complex is nearing completion at the socalled Gagarin Plateau (opposite the Moldova). It includes a seventeen-storey hotel, a concert hall, and a swimming pool. The design won a Gold Medal at the Exhibition of National Economic Achievements in Moscow.

Passing the square at the last stop of the No. 5 trolleybus you enter the Arkadiya park sloping down to the sea. The slopes are a protection from the wind and the trees provide shade. As a result, Arkadiya has a microclimate all of its own. The water on its shores is warmer than out in the open sea, there is little wind and the abundance of greenery provides cool on the hottest day.

In the park are fountains, cafes and restaurants, a post and telegraph office, souvenir, book and newspaper stands.

The “Arkadiya” beach is one of the best and consequently the most crowded. The shore slopes gently to the sea and until recently the beach itself was a narrow strip at the foot of the lime cliffs. It owes its present flourishing state to the work done to enlarge and improve it, which included reinforcing the coastline. After a stroll through the park, we return to the fountain at its entrance and continue the excursion on tram No. 5.

From Ploshchad Desyatogo Aprelya the tram turns down Pionerskaya Ulitsa (Pioneer St.). On both sides of this street, as well as at the beginning of Proletarsky Bulvar (Proletarian Boulevard) there are sanatoria and holiday homes.

The corner site is taken up by the multistorey Yunost Hotel built in 1982 and run by the Bureau of International Youth Tourism “Sputnik”. Two cardiological sanatoria-Rossiya and Ukraina occupy the stretch of land from Pionerskaya Ulitsa to the sea. 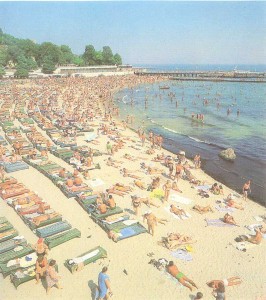 Behind, closer to the sea, on the right-hand side of the boulevard (No. 89) stands a light-coloured building of modern design. On the roof is a huge white ball with a red band. This is the Odessa Department of the State Oceanographic Institute. The Weather Bureau of the Black and Azov seas area also has its offices in this building. 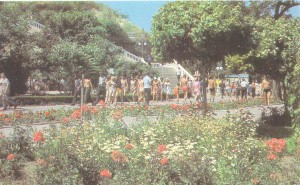 Proletarsky Bulvar can rightly be described not only as the health resort district, but also the science district. New sanatoria buildings have gone up, as well as a whole network of buildings for the Filatov Institute of Eye Diseases and Tissue Therapy, and also new University buildings and high rise blocks of flats.

The Boulevard is a pleasant place any time of the year, in the spring when the trees just begin to grow leaves and one can glimpse the sanatoria buildings, in the summer when the crowns of the trees meet overhead, in the autumn when they are ablaze with colour, and even in the winter, when the closeness of the sea is strongly felt.