The Children’s Sports Palace “Olympiyets”. It caters for children from the age of seven. The building has a gymnasium, various games halls, a special section for the high, long and vault jumps, and a running track with a special artificial covering. The total floor space of the building is 3,600 square metres. There are the usual dressing rooms and showers for 500 children, class-rooms, a first aid centre and a buffet. About 2,000 boys and girls take part in the track and field events, trampoline, karate, tennis, archery, volleyball and other classes. 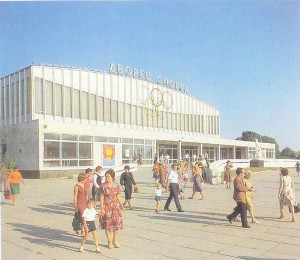 The Sports Palace is a good place to leave the trolleybus and continue the excursion on foot. Next door is the Sports Palace for adults with only a fountain separating the two. The city Sports Palace was built in 1975 and is also used for film shows and concerts. It seats 6,500 people and its facilities include basketball, volleyball, wrestling, figure skating, gymnastics, etc. Contests, including national championships, are often staged here. 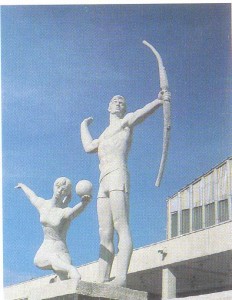 Opposite the Sports Palace is the main entrance to the Lenin Dendropark which stretches along the right side of the Avenue. The park was laid out on April 22nd, 1960, on the ninetieth anniversary of

Lenin’s birth. The site was formerly a wasteland cut by a deep gully, but now it is one of the finest parks in Odessa.

More than five hundred different species of trees and shrubs have been planted on the slopes of the gully including pines, firs, birches, chestnut trees and oaks. At the lowest spot of the park there is a large pond with fountains and bridges. It is an excellent place to spend a quiet morning or afternoon and provides much for those interested in the flora of the region.

If you enter the park you will find yourself on Alleya Druzhby (Friendship Avenue), running to your left and right,

parallel to the street. Its trees were planted by representatives from the other Soviet hero-cities: Moscow, Saint Petersburg, Kiev and Sevastopol, and from Odessa’s twin-towns: Marseilles, Varna, Segled, Yokohama, Vancouver and Genoa, as well as by the Soviet cosmonauts Valery Bykovsky and Georgy Shonin. The Avenue takes you to the exit from the park on Ploshchad Desyatogo Aprelya (April 10th Square) named after the day in 1944 when Odessa was liberated from the nazi invaders.

On the opposite side of the square is a stone of pink marble, it marks the spot where a monument to the founder of Odessa, Field-Marshal A. Suvorov, is to be erected.

Crossing to the right side, we continue along Shevchenko Avenue. The first street to the right leads to a big new residential district. The street Ulitsa Chernyakhovskogo (Chernyakhovsky St.) was named after the famous General Chernyakhovsky, twice Hero of the Soviet Union who was killed in battle near the end of the Great Patriotic War. A monument to the General stands at the beginning of the street outside school No.56, as it was the pupils of this school who launched a fund-raising campaign for the monument, contributing their share by collecting scrap-metal.

Ploshchad Desyatogo Aprelya is already part of the health resort district Arkadiya. The name was borrowed from the mountainous district of Greece, which was known as the home of contented pastoral people.