The keel for the third Project 22220 nuclear icebreaker «Yakutia» was laid on May 26 2020 at the Baltic Shipyard (a part of United Shipbuilding Corporation, JSC). The icebreaker is commissioned by FSUE Atomflot (subsidiary of ROSATOM).

The keel-laying ceremony for the third serial nuclear icebreaker of Project 22220 was held at the «A» slipway on the anniversary of the Baltic Shipyard and shortly before the St. Petersburg foundation day. 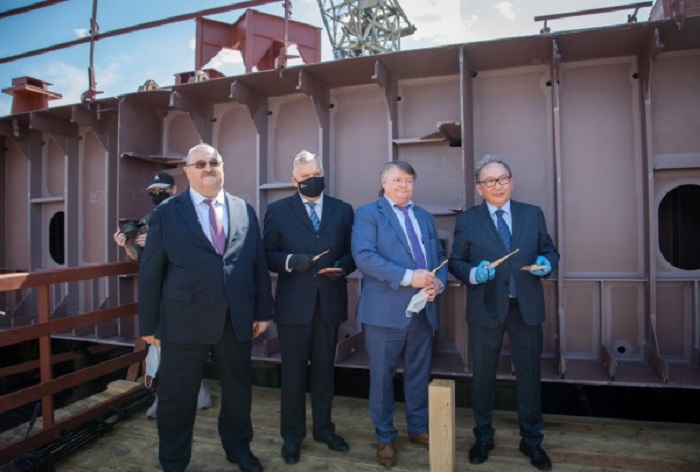 As tradition demands, a storm board was installed on the bottom section of the vessel, the honorable right to fasten it was granted to Vyacheslav Ruksha, Deputy Director General of the Northern Sea Route Directorate for the ROSATOM, Andrey Fedotov, Permanent Representative of the Republic of Sakha (Yakutia) to the President of the Russian Federation, Eduard Batanov, Vice Governor St. Petersburg and Director for the Department of Civil Shipbuilding USC and to Igor Shakalo, Chairman of the Board of Directors for the Baltic Shipyard.

The heads of Atomflot, division of the Russian Maritime Register of Shipping and Baltic Shipyard signed the act on keel laying. The keel laying ceremony was held in an abridged format due to the complicated epidemiological situation.

On the occasion of the ceremony, the Minister of Industry and Trade of the Russian Federation Denis Manturov said: «Today we started the construction of the third serial universal icebreaker «Yakutia». This is the fourth icebreaker of the project following the «Arctic», «Siberia» and «Ural». On the completion of the series construction, Russia will have the world’s largest fleet of serial nuclear icebreakers. These are truly unique vessels, not a single country in the world has even one of them. The engines of these ships are two nuclear reactors with a capacity of 175 MW each, which provide 7 years of autonomous navigation. The design of the icebreaker allows it to be used both in deep sea shipping along the Northern Sea Route and in the shallow areas of the Yenisei river and the Gulf of Ob, both in ice and in clear water. Each of the icebreakers is an embodiment of a modern, technological and competitive domestic industry».

Vyacheslav Ruksha, Deputy Director General of ROSATOM opened the keel-laying ceremony for the new icebreaker and congratulated the workers of the Baltic Shipyard and all the enterprises involved in the construction. He emphasized that Project 22220 nuclear icebreakers are essential for the development of the Northern Sea Route. «The construction of the icebreakers within the project confirms Russia’s undoubted leadership in the peaceful development of the Arctic».

«The keel-laying for the third serial nuclear-powered icebreaker is a landmark event for all enterprises related to the Arctic», said Mustafa Kashka, Director General of Atomflot. “Despite the pandemic and tough economic conditions, we continue to build icebreakers within the Project 22220. This indicates the promising future of the nuclear icebreaker fleet. Universal nuclear-powered icebreakers will allow us to take an important step toward unlocking the transport potential of the Northern Sea Route».

In his closing remarks Baltic Shipyard’s Director General Alexei Kadilov thanked the сontracting authority for the trust and emphasized that the plant would do their utmost to successfully administer contractual obligations. Alexey Kadilov made an honorable mention of other enterprises that will build nuclear-powered icebreakers of Project 22220 in cooperation with the Baltic Shipyard.

The Project 22220 nuclear icebreakers will be built under control and in accordance with requirements of the Russian Maritime Register of Shipping at the Baltic Shipyard and commissioned by ROSATOM. Nuclear icebreakers “Arktika”, “Ural”, “Siberia” and “Yakutia” will become the largest and the most powerful vessels of their type in the world.

Main characteristics of the vessel:

The icebreakers are equipped with specially designed two RITM-400 reactors and a steam turbine unit with an overall power capacity of 175 MW. «Iceberg» Central Design Bureau designed the technical project of the icebreaker in 2009. The vessel’s dual-draft concept allows for operating it both in the Arctic and in the mouths of the polar rivers. The icebreakers will be operated in the western region of the Arctic: in the Barents, Pechora and Kara Seas, as well as in shallower areas of the Yenisei estuary and the Ob Bay area.