The Odessa Philharmonic Society and Interclub 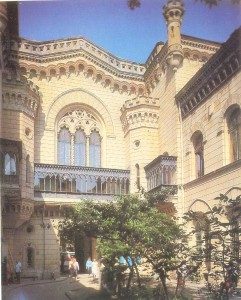 The building also houses “Interklub”, the International Seamen’s Club, or as it has been called by foreign seamen, “The House of Good Friends” because of its friendly atmosphere. The central hall of the club has stained-glass windows and an ancient Venetian chandelier. It is the centre of many activities and arranges get-togethers, excursions, visits to the theatre, dances, and also film shows. It has a large library of books in foreign languages and such facilities as table tennis, billiards, chess, etc. Students, port workers and teachers who speak foreign languages help in the work of the club. Its main aim is to provide visiting seamen with a closer insight of the Soviet Union and its people.

Jeanne Labourbe, a member of the “Foreign Collegium” and of the underground regional committee of the Communist Party, lived in house No. 24 on the right-hand side of the street, and it was here that she was arrested. She was born in France, but came to Russia in her youth and regarded the country as her second home. She joined the Communist Party in 1918 and at the age of forty came to Odessa to work among the French soldiers and sailors. 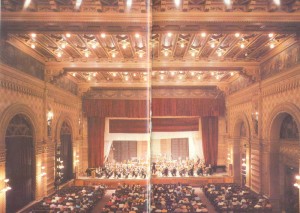 Practically the entire French garrison knew her. Soldiers and sailors listened to her and believed in her. As Lenin wrote: “The name of Comrade Jeanne Labourbe, whom the French shot in Odessa for Bolshevik propaganda, has become a slogan for the French working-class socialist press … for non-intervention in Russian affairs.”

If you are in a hurry or just foot-sore, outside the house is a trolleybus stop where Nos. 1, 4 and 10 will take you in two stops to Ulitsa Chkalova.

The Central Department Store is on the corner of Push-kinskaya Ulitsa and Ulitsa Vo-rovskogo (Vorovsky St.), house No. 72.

No. 79 on the left-hand side is the Orthodox St. Elijah Cathedral built in the neo-byzantine style with five cupola and a high blue belfry.

Another short block brings us to Privokzalnaya Ploshchad (Railway Station Square). The round gardens of the square are encircled by low wrought railings with sleeping stone lions at the entrance and a foun­tain in the centre. To the right is the Odessa planetarium-56, Ulitsa Chizhikova (Chizhikov St.), formerly the theological seminary.

A subway takes us across the street where there is an excellent view of the Railway Station. Destroyed by the nazis in 1944, it was rebuilt after the war, as were the Railway offices on the right-hand side of the square.

The construction took only eighteen months, from November, 1950, to June 1952, as the entire country pitched in to help. It was designed by architect Leonid Chuprin and has a useful area of 800 sq. m, a volume of 72,000 cub. m, a capacity of forty trains and 20,000 passengers a day.

The architect followed the classical style in his design. The cupola over the main hall ends in a spire with the Soviet coat of arms at the top. Over the portico there is a sculpture of a girl with the dove of peace in her hands.

The entrance hall has three arches commemorating three main events in the history of Odessa, 1905, the revolutionary uprising on the Battleship Potemkin, 1917, the Great October Socialist Revolution, and 1944, the liberation of Odessa from the nazi invaders.