The Sea Gates of the Ukraine 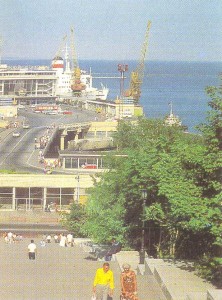 The Port of Odessa always held an important place in domestic trade and is even more important in international trade.
Half the passenger traffic and about thirty percent of the cargo traffic of the country passes through the Port of Odessa. The port is a first class highly-mechanised transport junction and is the base of the world’s biggest shipping company, the Black Sea Shipping Line, which has been awarded the Order of Lenin. Its transport fleet numbers about 300 cargo and passenger vessels. It encompasses 11 ports (Odessa, Ni-kolayev, Kherson, Yalta and others) and has a total of some 80,000 employees.
The entire passenger fleet and practically all the shipping line’s cargo ships are registered at Odessa, as well as research vessels for marine and space research, rescue vessels operating throughout the Azov and Black Sea areas and the hydrofoil boats.
The passenger fleet includes modern luxury liners that are in great demand with foreign travel agencies.
The fleet of the Black Sea Shipping Line has been completely renovated. Modern ocean-going cargo ships, equipped with automatic machinery and new navigation instruments operate in its fleet, as well as orecarriers, bulk carriers, container ships, etc.
The Black Sea Shipping Line has been awarded the international prize. The Gold Mercury, for its contribution to international trade.
Soviet trade ties through the Odessa port are increasing every year. At the beginning of the fifties it became obvious that the port could not cope with the mounting flow of cargoes. To the north the port is hemmed in by industrial enterprises, and to the south by health resorts. The only way out was to build a new port.
The site for it was chosen in the vicinity of the Sukhoy Liman, a natural bay cutting deep into the coastline, 32 km south of Odessa.
The new port, Ilichyovsk, was built with an eye to the future. It was opened on August 5th, 1958, and is much bigger than the Odessa port, its wharfs which are much longer and deeper enable it to accommodate the heavier and longer vessels.
Today Ilichyovsk ranks as the biggest port in the country. In its cargo turnover it has surpassed all the Black Sea ports, including Odessa. Forty percent of the Black Sea Shipping Line fleet are now registered at Ilichyovsk. It is highly mechanized, with portal and floating cranes, and other machines and mechanisms that make the dockers’ work much easier.
Ilichyovsk is the only Soviet port which can handle liquid goods. A number of enterprises have been built in the port vicinity, including the Ship-Repair Docks, named after the Fiftieth Anniversary of the UKRAINE, which boast the world’s biggest floating dock with a displacement of 100,000 tons.
In 1976 the first container plant was built in Ilichyovsk and also a special wharf to handle container ships.
In 1978 one of the world’s largest ferries started operating between Ilichyovsk and the Figarian port of Varna. Two Bulgarian and two Soviet ferries replaced a whole fleet of smaller vessels. Each of the ferries can take on one hundred and eight fully loaded railway cars, i.e. two train loads. Loading and unloading takes only a couple of hours, compared to the two days needed for conventional ships.
The Soviet ferries are named after the heroes of Plevna and Shipka, and the Bulgarian after the heroes of Odessa and Sevastopol. 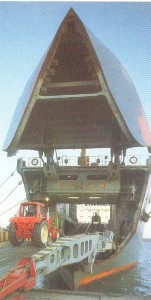 The left bank of the Sukhoy Liman has been turned into one of the biggest fishing ports. It is the home port for the whaling fleet Ukraina, the floating fish factory Vostok, and dozens of refrigerator trawlers and fishing vessels.
Work is underway on another new port, Yuzhny. Its first section went into operation in 1978-79. Construction began in August, 1973. It lies
30 km to the north-east of Odessa on the western bank of the Grigoryev Liman, the relic of an ancient river that once flowed into the Black Sea.
A unique industrial-transport enterprise was built in a short space of time and combines a chemical production complex with a deep-sea port. The chemical plant itself produces 450,000 tons of ammonia a year, while the port facilities specialise in the handling of chemical cargoes. There are also storage facilities for the chemicals and processing plants. The port’s first pier could be regarded as a continuation of the plant.
The port, however, can handle more than the plant produces, so additional produce is piped from other plants along the ammonia pipe-line from Togliatti to Odessa. The line from the Volga banks to the Black Sea is more than 2,400 km long and can handle 2,5 million tons of ammonia a year. It has no equal in the world inasfar as the diameter of its pipes, degree of automation and other technical facilities go.
The second part of port Yuzhny, on the eastern bank of the liman, is to be completed in the years of the 11th five-year plan (1981-1985). It ill handle ore, coal, timber and other cargoes.
When completed Yuzhny will even outsize Ilichyovsk. Its freight turnover will be twice as great as that of the Ilichyovsk and Odessa ports taken together. 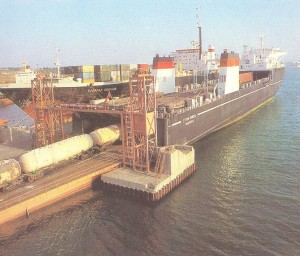 As the construction of industrial enterprises gets underway, the problems of environmental protection are kept well to the fore. A whole system of precautionary measures are taken to ensure that
there will be no pollution of the sea or the flora and fauna. All chemicals, for instance, en route to the port or the ammonia plant, or in the port itself are transported by closed systems. Precipitation on the territory of the complex is collected by special drains and undergoes biological purification before being used for irrigation.
Not far from the port of Yuzhny a new township is going up for the seamen, port and chemical workers. It too is being built in two sections, the first for 25,000 people and the second for 50,000.