‘The Worker and Kolkhoz Woman’ Dance Off Their Pedestal 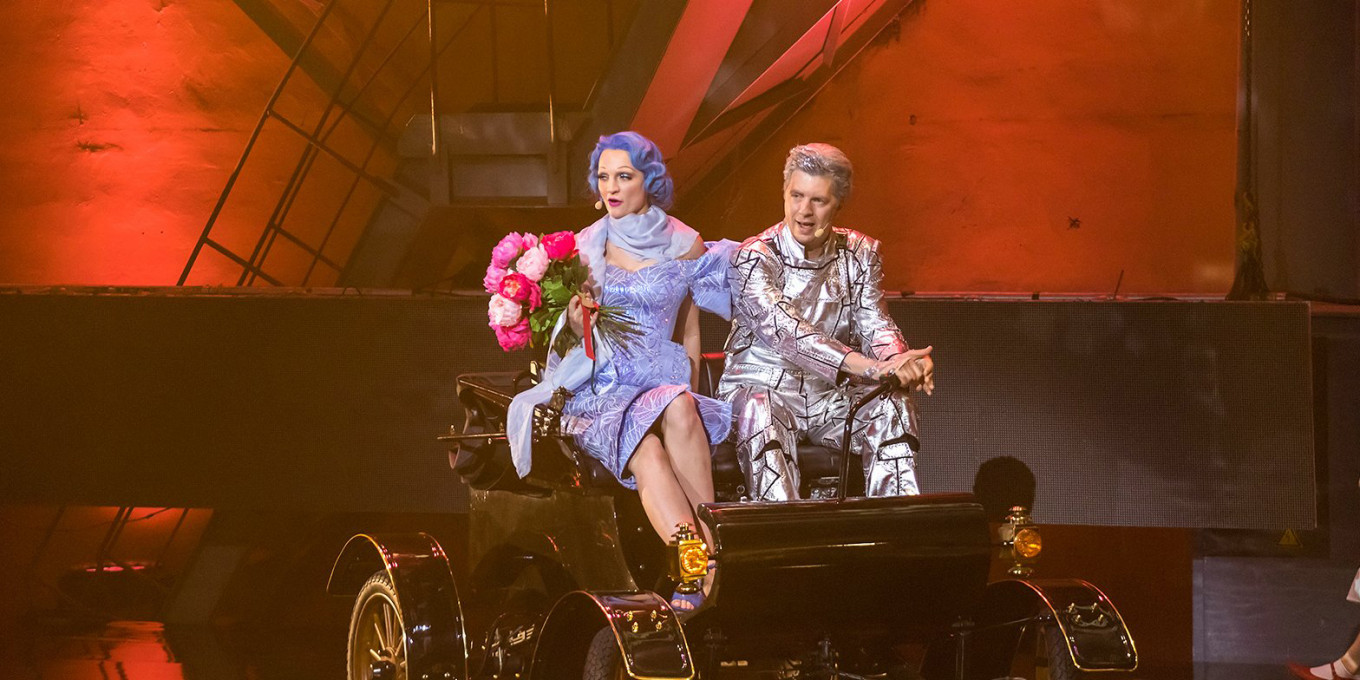 On Saturday evening the Zaryadye Concert Hall was filled with blue and red hair: on stage, one singer was blue and another was red; in the audience, blue rinses and bifocals mingled with hipster multi-colored streaks.

The audience knew this because the evening was introduced by Alexander Kibovsky, head of Moscow’s department of culture, which funded the show, and Pavel Kaplevich, the producer of the show whose slightly insane idea was the basis for the opera.

The 70-minute opera begins in a studio where sculptor and architect Boris Iofan has the idea for the massive sculpture of the worker and collective farm woman, and sculptor Vera Mukhina begins to create it. We know who they are because they are wearing aprons with their names on them in English. But the fire engine red-haired Mukhina is a bit of an enchantress, and she can bring her creations to life. The two Soviet icons of the working class — Nikolai, the handsome factory worker and Anna, the comely farm worker — in sparkling metallic costumes, are able to release their poses and stretch it out when they are finally alone in the studio. Then they are packed up and sent to Paris for the 1937 World’s Fair.

We know this because the screens in back of the minimalist stage that displayed blueprints, models, and pink and blue neon symbols during the early part of the opera switches to scenes of Paris, the Eiffel Tower, city maps, and advertisements for the fair. We also know we’re in Paris because the dancer Ilse Liepa performed a human split screen dance as Pablo Picasso and Marlene Dietrich — one side Picasso, the other Dietrich — that brought down the house.

At the World’s Fair, the Soviet pavilion is visited by a different Pablo Picasso — identified by the cubist protuberances on his back — and Marlene Dietrich, with blue hair and a sculpted glittery dress that gives her figure comic-book oomph. Picasso surveys the sculpture and sings his praise in modern and snarky lyrics: “Marlene, can you see? Russia has gotten up off her knees!”

On his pedestal, Nikolai falls in love with the movie star. That night, he drives around the city with Marlene, which leaves poor Anna alone and unprotected. She is kidnapped by a petulant little Adolph Hitler, dressed in black shorts, white knee socks and a glittery arrow headpiece, who has fallen hopelessly in love.

Also involved in this madness is a three-man Artistic Commission, listed in the program as the three heads of the dragon Gorynych, that first finds Anna’s clothing-draped nipples offensive; Stalin, played by pop group Moralny Kodeks singer Sergei Mazeyev, who finds the nipples acceptable; and the secret agent Gray Fox sent to find Anna who is, in fact, a gray fox in a Soviet uniform.

Like previous Kaplevich productions, it is as if Modest Mussorgsky had married the Cirque de Soleil and produced a stage-full of singers and dancers dressed by the folks who do the MTV Music Video Awards ceremony. Conductor Filipp Chizhevsky looked like he’d flown in from an alternative-reality Hogwarts in his best robe decorated with red stars, hammers and sickles.

But the basics are solid: music by Vladimir Nikolayev, lyrics by first-time librettist poet Mikhail Chevega, and direction by Yevgeny Kulagin. The singing was sublime, the dancers were captivating, and the young orchestra was in fine form. And if the sound mix was a bit off from time to time, no one in the audience seemed to care. We lost count of the curtain calls.

In the curious way of Moscow premieres, it’s not clear when and where this will appear on stage again. In a post-performance interview, Kaplevich said it might go to the expo in Abu Dhabi, which would seem to be very fitting indeed for this witty and magical production. But we hope Muscovites will be able to see again soon, too.