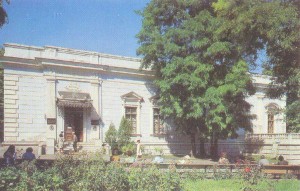 The building on the right-hand side with two huge ancient anchors at the entrance is the UKRAINE Naval Museum. Designed and built in 1842 by G.Toriccelli in a strictly classical style, it was originally the English Club.

It, too, stands on a sharp incline, so its facade which overlooks the Opera and Ballet Theatre has only one storey, while the side facing Ploshchad Kommuny has a high socle and a ground floor. The White hall of the museum with its classical lines and vast windows opening onto a garden is perhaps the most interesting of all its rooms. 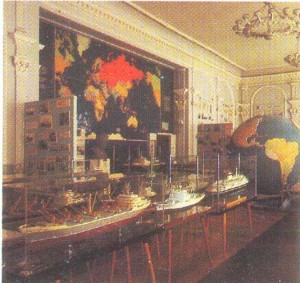 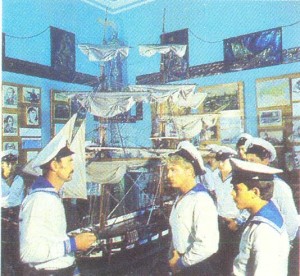 The museum has a vast collection which traces the history of Russian shipbuilding and navigation from ancient times to present days. Some 100,000 exhibits are on show in the eleven halls. They include automatic models, diograms, and instruments which are found on the bridge of a ship and in the radio cabin. There is an imitation of a ship’s sway, the sound of the waves, etc. The museum describes the glorious revolutionary traditions of merchant seamen and the part they played in the Great Patriotic War. Anybody interested in the history of shipbuilding and navigation will be delighted to visit this museum.

In the beginning of 1918 right after the establishment of Soviet  power,  the  building

which today houses the museum was the headquarters of the Odessa Regional Committee of the Communist Party.