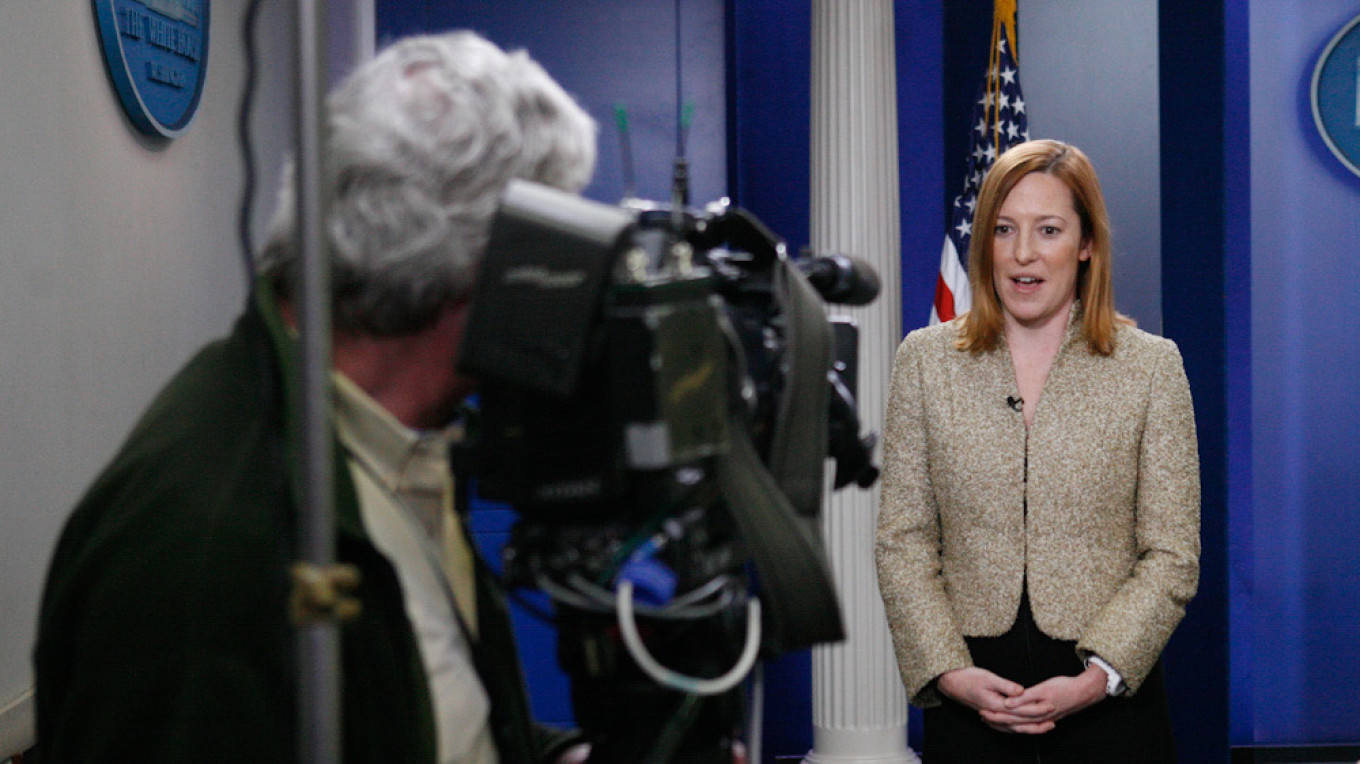 This week’s news that U.S. President-elect Joe Biden had chosen Jennifer Psaki as his administration’s press secretary sparked a flurry of excitement on Russian state media and social media alike.

“We are looking forward to Jen’s return,” said Vladimir Solovyev, a controversial host on the state-run Rossia 1 broadcaster and one of Russia’s main spin doctors, following the announcement.

A little-known official in her home country, Psaki is a celebrity in Russia — even if against her will.

Psaki’s rise to Russian stardom stems from her time as State Department spokeswoman from 2013-2015 and as the Obama White House’s communications director from 2015-2017, some of the most contentious years in U.S.-Russia relations. Russian state television pundits and bloggers alike seized on gaffes she made while speaking on Russia-related topics, churning out jokes, satirical memes and videos, and constantly trolling her.

Psaki was also the target of sexist jokes on topics ranging from not knowing who the father of her child is to her lacking knowledge of eastern European geography. The term “Great Psakiing” was coined in Russian to mean “confusing the facts.”

Dmitry Kiselyov, another Kremlin-aligned television host, reminded viewers this week of the time Psaki accidentally said gas supplies flow from western Europe through Ukraine to Russia, not the other way around. While Psaki corrected herself shortly after making the mistake at a live press briefing, it didn’t save her from attacks on her intelligence.

“This Psaki calmly declares that gas in Europe flows from west to east. It was she who was going to send a fleet to the shores of Belarus,” Kiselyov said on his told the state-run RIA Novosti news agency.

This time, the attacks on Psaki are coming not just from Russian trolls and state media pundits but also from political opponents at home. Hosts on the conservative Fox News network took a page from Russia’s playbook by ridiculing Psaki for a 2014 photo next to Russian Foreign Minister Sergei Lavrov and Foreign Ministry spokeswoman Maria Zakharova in which she wears a pink Soviet fur hat.

Psaki herself has displayed a less-than-enthusiastic reaction toward the renewed attention from Russia, tweeting about a resurgence in online trolling following her nomination to the Biden administration.

“For anyone who hasn’t been the target of Russian propaganda (cc: @McFaul, @HillaryClinton) the purpose is to discredit powerful messengers and to spread misinformation to confuse the public. Anyone who repeats it is (unwitting or not) simply a puppet of the propaganda machine,” Psaki said in a Dec. 2 tweet.

Another one of Russian pundits’ favorite Psaki moments stems from a leaked 2014 recording of a conversation between U.S. Assistant Secretary of State Victoria Nuland and U.S. Ambassador to Ukraine Jeffrey Pyatt in which Nuland says: “and, you know, f*** the EU.”

When asked about the incident by reporters, Psaki blamed Russian sailors for teaching Nuland bad words when she spent eight months onboard a Russian ship in her youth.

“You all know Victoria well and you are probably aware that when she was 23, she lived on board a Russian ship for eight months and, perhaps, learned certain vocabulary there,” Psaki told reporters.

That time, though, Psaki was actually joking.