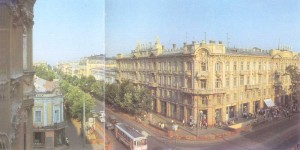 The square holds the Regional Scroll of Honour, winners of the socialist emulation. Also on white marble are inscribed the names of Heroes of the Soviet Union and Heroes of Socialist Labour born in Odessa and its region.

Ulitsa Lenina, one of the main thoroughfares of Odessa, starts at the Opera theatre. The building on the first corner on the right-hand side is the Registrar’s Office (No. 4) where up to three hundred marriages are solemnised each month. The greatest number are on Saturdays and Sundays. 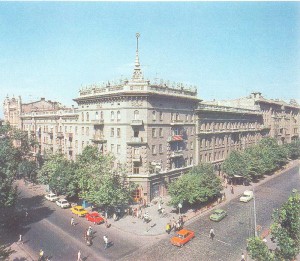 At this point Ulitsa Lenina crosses Dehbasovskaya Ulitsa (Deribasov St.). This is where we turn to the right.

The Odessa writer Ivan Gaydayenko wrote: “Three-quarters of the world know of Odessa,   but   probably  the whole world has heard of De-ribasovskaya. It was the people’s of Odessa passionate love for Deribasovskaya that created its fame, they sang its praises in song, describing it as a street flood-lit by the sun, a street of smiles and gaiety, white acacia, flowers and excellent cobblestones”.

The street was named after losif (Osip) Deribas, one of those who fought with Suvorov and who stormed the fortresses of Khadjibey and Izmail.

What lends Deribasovskaya its unique character is the old cobblestones, the big shady linden trees that re­placed the acacia at the end of the sixties, and of course, the gay, typical southern crowd jostling on its pavements.

When you walk down the right-hand side, you will notice the monumental building on the corner of Ulitsa Lenina, (No. 8), the building of the State Bank. Another corner building, house No. 14/17, where Catherine street crosses Deribasovskaya, is the headquarters of the Black Sea Fishing Association “Antarctica”. On the opposite corner is the only modern building on Deribasovskaya, the restaurant Bratislava.

The two-storey building of the former Richelieu lyceum takes up practically a whole block (16, Deribasovskaya UL). It was founded in 1817 and was one of the first cultural centres of Odessa. Pushkin was a frequent visitor, and his poetry, banned by the censor for its political overtones, was copied and passed from hand to hand among the students.

A memorial plaque with a bas-relief recalls the great Polish poet Adam Mickiewicz. He was exiled from Poland for his

participation in the gatherings of freedom-loving youth and spent almost a year in Odessa. He was supposed to teach at the lyceum, but first there was no vacancy, and then the tsarist authorities decided that he should not remain in the south.

The second memorial plaque commemorates the great Russian chemist Dmitri Mendeleyev, who gave the world the Periodic Table of Elements. He taught in the school attached to the lyceum in 1855-56.

Deribasovskaya leads to the City Gardens (on the right-hand side) with its fountain, numerous benches and an old summer-house. They were laid out shortly after the foundation of Odessa and were its first park.

The Gardens are decorated with bronze sculptures of a lion and lioness, the work of A. Sayn. Deep inside the Gardens is the open-air hall of the Philharmonic Society.

On the corner of Deribasovskaya and Preobrazhenskaya street there is a smallish two-storey light grey building, the former offices of the Governor-General where Pushkin served as archivist during his exile.

On the either side of the street are the hotel and department store Passazh (33 Deribasovskaya Ul.). The store is interesting from an architectural point of view. Despite its clearly eclectic image (built in 1898-1899 by Lev Vlodek) the interior has an elegance all of its own, with its glassed-in arches, and wealth of moulding ornamentation and sculptures. At the Deribasovskaya end of the building there are the figures  of two  Roman Gods, Mercury on a steam-engine and Ceres on a boat.