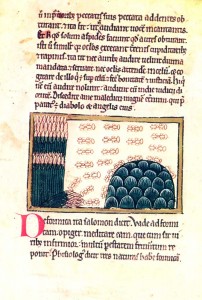 Ant /formica/ 9X5.5 cm
The Saint Petersburg Bestiary similarly to the early versions of “Physiologus” begins the story of the ant with a quotation from the Proverbs of Solomon: “Go to the ant, О sluggard; consider her ways, and be wise”. /Proverbs 6:6/. “Physiologus” treats the ant in strict adherence to the moral of the proverb, each time deducing some kind of moral lesson from her behaviour. Following “Physiologus”, the bestiary relates the three “natures” of the ant: the first is that ants walk in line, each carrying one grain in her mouth; other ants do not take the grain away from those who have procured it, but go and get it themselves /The provision and diligence of the ant are symbolic of providence and vigour, the prototype of wise maidens as opposed to the unwise ones living in idleness/. When an ant stores seeds in the nest it divides them into two, lest by chance it should germinate. The division of the seed comes to symbolize separation of the literal meaning from the symbolic meaning of the Holy Writ necessary for its true understanding, since, according to Apostle Paul, “… the written code kills, but the Spi:rit gives life” /”2 Cor.3:6/. In time of harvest an ant walks among the crops and feels whether the stem is one of barley or of wheat. Barley means the teachings of heretics, since, as is said in the Book of Job, heretics give people barley instead of wheat /Job 31:40/. The early versions of Latin “Physiologus” contain a long list of heresies enabling one to know the time one or another version was first written ‘. In its later versions and in bestiaries the list of heresies is in most cases missing. For all that, the interpretations to be found in the ancient “Physiologus” are expanded and enriched by new comparisons, moralizations and descriptions pertaining to the habits of ants. The medieval writings give credit to the ant’s providence /Isidor XII.III.9/, Pseudo-Hugh /11.29/, Albert the Great /XXVI.I.9/; Brunetto Latini /I.V.190/. The mention of fantastic ants extracting gold is derived from Isidor, but we fing their description already in the writings by Herodotus /III. 102—105/, Pliny /IX.30.36/ and Aelian /11.25/. The story of an ant is followed by a story of an antlion “formicaleon” or “mirmicaleon” which in Greek “Physiologus” and its eastern translations occupies a separate chapter. Yet, in the bestiaries of the twelfth century the interpretation of the ant-lion undergoes a considerable change. Greek “Physiologus” considers the ant-lion to be born of a lion and an ant and having two natures due to which it can eat neither flesh nor grain. An ant-lion has come to typify a double-minded and double-tongued person. The Latin versions of “Physiologus”, proceeding from the interpretation given by Gregory the Great /V.20.40.PL, v.LXXV, col.700/ and then by Isidor /XII.III.10/, describe the ant-lion as the lion of the ants’ kindgdom. The New York bestiary leaves out the story of the ant-lion. Albert the Great mentions the ant-lion but not in connection with the ants /XXVI.1.20/, though in his interpretation he follows the Western pattern. Philippe de Thaun /861 — 1104/ and Guillaume le Clerc /871 —1020/ give a poetical depiction of the ant’s three “natures” and mention the Ethiopian ants mining gold.