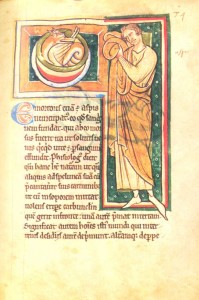 Asp Emorroris /emorroris, haemorris/ width 9.8 cm, height in tha smaller part 5.1 cm, height in the long part 12.2 cm
The text is traced back to Isidor /XII.IV.15/ who drew on the story by Solinus /27.32/ and enlarged upon it, adding to it the story of the asp that was present in the “Physiologus” and had undergone changes with the passage of time. The brief characteristic of Emorroris /Pseudo Hugh, 11.30/, which used to bleed a man white, rendering his body lifeless, is followed in the bestiary by a version of the story of the asp hiding in the burrow not to hear the song of a charmer. The burrow symbolizes the world driven by carnal desires. The serpent does not hear the call of the heaven. What is more, looking down on the ground it is does not see the heaven and good deeds. The text is supplemented by the tale about a precious stone in the asp’s head sought by the snake-charmer. This tale had come from the epoch of antiquity and is mentioned by Albert the Great /XXV.II.I/, and Brunetto Latini /I.V.139/.
A spectacular description of Emorroris was made by Guillaume le Clerc /2575—2583/ in the poetic story of the asp. And it is preserved by Albert the Great /XXV.II.30/.
The miniature illuminating the text about Emorroris is based on the most fantastic part of the story and shows the serpent with a precious stone in the forehead, which lies coiled in its hiding place, and the charmer luring it out of the burrow.