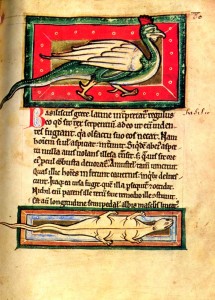 Basilisk /basiliscus/. Scorpion /scorpio/ 10.1 X5.8 cm 10.4X2.5 cm
The text is borrowed from Isidor /XII.IV.6—9/ who drew on the information provided by Pliny /VIII.21.33; XXIX, 19/ and Solinus /27.51/. Basilisk is the derivative from the Greek word “basileus” /king/, which implies that it is the king of snakes. It is able to kill by its look or breath. It is only the weasel that can do harm to basilisk. Like the basilisk, the scorpion prefers living in a deserted place and can kill a man.
In the ancient times the basilisk was visualised as a winged serpent with the head of a cock. The animal was inevitably portrayed with the wings of a swan, the comb of a cock and the spiked legs of a bird. Pseudo-Hugh /111.41/ made a brief mention of the basilisk, while Pierre of Beauvais /11.213—214/ gave a detailed story of the basilisk hatching from an egg laid by a cock. The killing look of the basilisk was mentioned by Albert the Great /XXV.2.13/ who names Pliny and Avicenna as his source. The author of “The Bestiary of Love in Verse” gives a love version of the story of the basilisk /3321/ and tells of the nature of the scorpion /2269/ which “licks with its front and stinges with its behind”; he uses the comparison of the scorpion with a mean adulator drawn by Guillaume de Lauriss in his “Roman de la Rose” /1039—1043/. Brunetto Latini complemented the story of the basilisk with the story telling that Alexander the Great had found a way of seeing the monster through a wall of a big glass reservoir in which a man could be invisible to the basilisk.