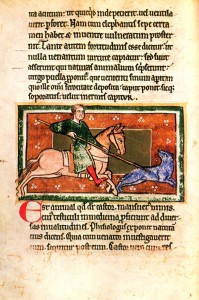 Beaver /castor, fiber/ 10×5.7 cm
The story of the unfortunate beaver and his symbolic interpretation is in itself clear evidence of profound inner links between the naturalistic, the symbolic and the etymological elements in an animal as depicted in the bestiary. The story about the beaver is a combination of the text by Isidor with the tale given in “Physiolo-gus”. Isidor /XII.II.21/ derives the name of the animal “castor” from “castrando” i.e. “castrating’ or “emasculating”. The desrription of the beaver originates from Pliny /VIII.30.47/. When the beaver notices that he is being pursued by the hunter, who is chasing him to cut off his testicles for curative purposes, he himself removes his testicles and casts them before the hunter. Hence, every man, the bestiary suggests, who wants to live in chastity must cut off all vices and cast them into the face of the disgraced Devil.