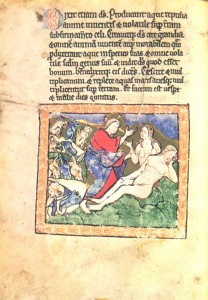 Creation of Eve 9.5X8.2 cm
The miniature is accompanied by a text from Genesis on the creation of Man, his being placed in the Garden of Eden, on the denomination of animals and the creation of Eve /Genesis II/. With a very few exceptions (e.g. “pleni” instead of “perfecti”) the text of the manuscript coincides with the text of the Vulgate. The first four miniatures conform to the traditional Romanesque and Early Gothic iconography of scenes of the Creation of the world and the Man widely circulating, in particular, in the English and North-French illumination of the end of the XII-th с and the beginning of the ХIII-th с The style of their execution differs from that of most miniatures of our Bestiary and is closer to the painting in the Psalter of the Archbishop of York Geoffrey Plantagenet (Leyden, University Library, ms. A.76).

Creation of birds and fishesAdam gives the names to animals