Raven /corvus, corax/ medaUion 5.4 cm in diameter
Repeating Isidore /XII.VII.43/ the bestiary indicates that the name „corvus” comes from the croaking sound of the raven’s voice. It is said to be a bird which refuses to feed his children until black feathers grow on them and he recognizes in them his younglings. The belief that the birds peck out corpses’ eyes is similar to that of the biblical text /Prov.30:17/. “Aviarium” discusses two sides of the raven’s nature which are spoken about in the Holy Writ and which are commented upon by Gregory the Great in “Mo-ralia in Job” /Job 38:41/. The raven is seen either as a tutor “a raven crowing is a tutor preaching”, says the manuscript preserved at the Saint Petersburg State Public Library, /Lat. Q.v.I, N 131, f. 16 v./ or as a sinner clothed in black feathers of his sin and overtaken by carnal desires.
Pierre of Beauvais /11.156/ and Brunetto Latini /I.V.158/ give a traditional retelling of the text of the bestiary. 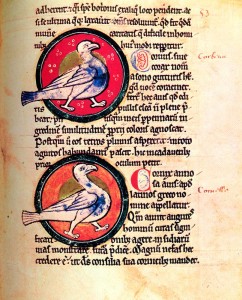 Crow /comix/ medallion 5.4 cm in diameter
The chapter about the crow comes from St.Ambrose and Isidor /XII.VII.44/ and not from the tale missing in the Latin versions of “Physiologus”. Pseudo-Hugh is very close to this text /III.35/. If in the antique tradition /Athenaeus, Deipnosophistae X.394 b; Plutarch, Bruta ratione uti, v. 989/ and in the biblical tradition, as well as in original “Physiologus”, the crow was believed to be a symbol of matrimonial devotion, medieval writers looked upon it as a bird endowed with a power of foretelling. The crow discloses treachery, predicts the future, and feels the coming of bad weather. The crow’s care of the younglings is held up as an example to men. The description of how a crow gives each of her young an equal share of food is followed by an appeal to assign each brother an equal share of paternal inheritance. “Aviarium” /35/ develops the theme of the education of the young and the moralization which follows. Albert the Great /XXIII.I.28/ and Brunetto Latini /I.V.159/also extend the text of the bestiary. The crow is sometimes to be seen in the Romanesque art illustrating the fable about the fox and the crow /Bayeux tapestries, reliefs of St. Martin’s Church in Fromista, XI cent./