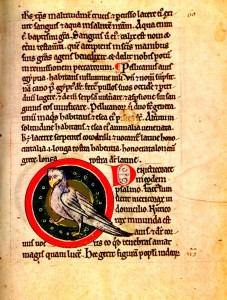 Eagle-Owl /noctua, nycticorax/ medallion 5 cm in diameter
In the bestiary, like in the old Latin versions of “Phy-siologus”, the story of the eagle-owl follows the story of the pelican since the former is mentioned in the psalm of the same woebegone psalmist /”I am … like an owl of the waste places …, Psalms 102:6/, the quotation which opens the narrative of the eagle-owl who loves night more than day. In version “C” which is close to the original Greek variant the eagle-owl is identified with Christ. Like the eagle-owl, Christ turned his love to the heathen living in darkness and scorned the Jews who knew the testaments of their fathers. In the later versions of “Physiologus” and in bestiaries the eagle-owl symbolizes the Jews who turned away from Christ preferring darkness to the light of the teaching of Christ. In “Aviarium” the eagle-owl — “conversus in occulto” —prefers secret knowledge to a wordly praise. He rejects the glitter of wordly vanity in favour of the invisible light of God’s truth.
In the bestiary the story by Isidor /XII.VII.40—41/ is partly used. Pierre of Beauvais /III.234/ devotes a chapter to the owl. Albert the Great /XXIII.1.84/ distinguishes between “noctua” /owl/ and “nycticorax” /eagle-owl or screech-owl/.