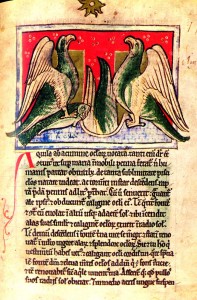 Eagle /aquila/ 10×7.5 cm
The chapter on the eagle, the king of all birds, opens the section on birds, just like the legend about the lion opens the section on beasts. In the original “Physiologus” the story of the eagle was not assigned so important a place, which is accounted for by the fact that the contents of “Physiologus” received proper arrangement at a later period. “Physiologus”, proceeding from Psalm /102:5/, gives a symbolic interpretation of the eagle as a symbol of human soul renewed by his turning to God. When an eagle grows old he flies up to the sun, and there his wings are singed and his vision is cleared. Then he dives three times into a spring to regain the beauty of plumage and power of vision. “The renewal of the eagle is the revival of the soul”, sums up the scribe of “Aviarium” by Pseudo-Hugh /1.56/ preserved in the State Public Library in Saint Petersburg /Lat.Q.v.I n 131, f.35 v./.
To the symbolic interpretation of the eagle borrowed from “Physiologus” the bestiary adds information from Isidor /XII.VII.10/ and St.Ambrose /V.18.61/, originating from Pliny /X.3.4/ and Aristotle /IX.619 a.16/.
According to Isidore “aquila” takes its name from “ab acumine”, a bird of sharp eyesight which can see even small fishes in the sea when flying high above it. The story of how the eagle raises his young is trackable to St.Ambrose /V.18.61/. The eagle, it says, exposes his young to the sun and those who cannot bear the glaring sunlight are thrown down as not worth being raised. So the parents condemn their children not because they are cruel, but because they are steadfast and strong in mind. Only the coot-bird who is also called

(deceiver) may take pity on the baby, pick it up and nourish it together with her own fledgelings. It would be good, the bestiary points out, if there is a coot to “adopt” a youngling which is not his own. But we, people, cruelly turn out our own kinfolk.
Philippe de Thaun /2013—2060/, Gervasius /828— 848/ and Guillaume le Clerc /657—738/ give a vivid portrayal of the eagle. Pierre of Beauvais expands the story of the eagle /11.164/. The “Bestiary of Love in Verse” modifies the narration into a secular allegory /1058, 2563, 2899/. Albert the Great adds to the story of the eagle the story of an eagle-stone /XXIII.I.I/ which in the bestiary is put in the chapter about the vulture. Brunetto Latini translates the traditional story of the bestiary /I.V. 147/.
In his presentation of three eagles the painter of the Saint Petersburg Bestiary follows the traditional pattern. One of the eagles is flying up toward the sun, another is diving into the spring and a third is carrying a fish in his claws. He creates a solemnly monumental symbol by arranging the stylised birds against each other under the shining sun at the top of the page.
The eagle in the miniature of the bestiary is clearly influenced by the traditional stylization of the eagle, a symbol of. St.John the Evangelist. The eagle was among the most favourite zoomorphic motifs in the Middle Ages and symbolized courage, manliness and renovation. The stylization of the Eagle originates from Middle East motifs brought to medieval Europe through Byzantine, Syrian and Arabic models.