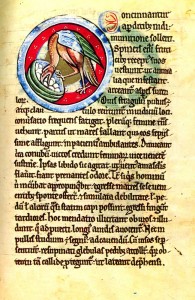 Hawk /accipiter/ medallion 5.7 cm in diameter
The text repeats Isidor’s story /XII.7.55—56/ about a bird of prey better equipped in spirit than in its talons. He does not distinguish between a hawk and a falcon, deriving its name “accipiter” from “accipiendo, accipio” which means “to seize”. The story tells us about the courage of the bird and his austere attitude to the younglings. The bestiary does not say anything about the art of falconry on which tractates were written in the twelfth and thirteenth centuries. The subject was dwelled upon also in philosophical writings, such as “Polycratic” by John of Salisbury and in such poetical works as ” Le Roman de Deduiz” by Gace de la Buigne of the fourteenth century and in encyclopeadic books, such as “The Book of Treasures” by Brunetto Latini /I.V.I2/. The “Aviarium” gives a detailed symbolic interpretation of the falcon /13—19/ derived from “Mora-lia in Job” by Gregory the Great /PI, v.LXXVI, col. 623/. His interpretation is connected with the symbolism of the Northern cold windaquilon, sent by Satan, and the Southern hot wind bringing with it warmth and God’s grace. The falcon who opens his wings to meet the Southern wind, which blows off his old feathers, is compared with an aging man invigorated by his belief in God. “Aviarium” contains sections on wild and domestic falcons and offers recommendations on treating them. /1.13—19/. Albert the Great in the chapter “De Accipitris” /XXIII. 1.2/ repeats the bestiary though he has a special section “De Falconibus” where he speaks at length about the numerous breeds of falcons, their raising, feeding, and curing /XXIII.I.4/.