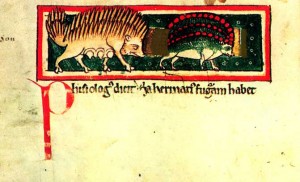 Hedgehog /herinacius, ericius, echinus/ 9.3X3 cm
According to Isaiah’s prophesy of the end of Babylon, the hedgehog is among the “unclean” animals /Isaiah 13:22, 34:1/. In “Physiologus” he is placed after the centaur. The text of the Saint Petersburg bestiary follows version “B” about the hedgehog “armed with spines” on which he sticks a bunch of grapes which he brings to his babies. The Saint Petersburg Bestiary contains a brief moralizing piece, instructing man to guard his “vineyard of thought”, but it lacks the symbolic interpretation of the hedgehog of the early Latin manuscripts, in which the image of the hedgehog sticking grapes on his spines is associated with the Devil stealing grapes from the vineyard of Man’s soul. In the Bestiaries of Philippe de Thaun /1739—1774/ and Guillaume le Clerk /1113—1150/ this interpretation is presented in a lively poetic manner. The habits of the hedgehog are described in the writings of St.Ambrose /VI.4.20/, and in Isidor /XII.III.7/. Pseudo-Hugh mentions that the meat of the hedgehog is a good cure /II.4/; Albert the Great /XXII.I.43/ and Pierre of Beauvais /11.198/ add new particulars of the story. Unlike luxurious ornamental compositions or entertaining stories in pictures illuminating the narrative about the hedgehog in the bestiaries in the twelfth century, the miniature of the Saint Petersburg Bestiary, keeping to the early miniatures as models, shows a side view of two hedgehogs against a flat colouful background. The grapes stuck on the spines become an ornamental design.