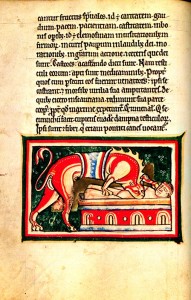 Hyena /hyaena, hyena/ 10.5X7 cm
In the Middle Ages the hyena feeding on carrion was believed to be the most repulsive creature of all. The Old Testament refers hyena to unclean animals /Lev.II, Deuteronomy, 14/. The image of the hyena hovers above the ruins of Babylon /Isaiah, 13:22, 24/, though there is no mention of the hyena in the translation of St.Jerome. The symbolic interpretation of the hyena given in “Physiologus” stems from the antique belief that the hyena was a bisexual creature, which was denied already by Aristotle /On Parts of Animals, III, 757, a, b/. The image of the hyena seems to expose the sins of Sodom, lust and idolatry. Latin version “B” and writings by Pseudo-Hugh /11.10/ intoduced new details into the story of the hyena and strengthened hyena’s association with a double-hearted person. They likened hyena to the children of Juda who served God at first and then resumed worshipping the once overthrown idols.
The story about the hyena added to the information derived from Solinus /27, 23—26/ who says that hyena is able to imitate the human voice, to lure the man into death by its cunning. The animal has a rigid backbone and has to turn its whole body to look back. The beast is believed to have a precious stone in its eye, which can enable a person to see the future /Isidor, XVI. 15. 25/.
Philippe de Thaun /1177—1214/ and Guillaume le Clerc /1575—1606/ gave a poetical version of bestiaries. Pierre of Beauvais /III.203/ said it had the body of a bear and the neck of a fox. Albert the Great denied the possibility of the hyena changing its sex /XXII.1.57/, while Brunetto Latini. stuck to that version /I.V.191/.