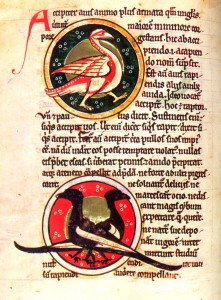 Magpie and Woodpecker /pica et picus/ medallion 5.5 cm in diameter
Following Isidore /XII.VII.46/ who quotes a line from the epigram by Martial /1.14.76/ in the chapter about the magpie, the bestiary compares the garrulous magpie with a poet, since the magpie utters the words as distinctly as a man during a recital does. The story about the woodpecker from Isidor /XII.VII.47/ is also there. It is called “picus” in honour of Picus, the son of Saturn /Ovid, Metamorphoses, XIV, 390; Virgil, Aeneid VII.197/. “Aviarium” does not include the story of the magpie and woodpecker. The story of the woodpecker might have been included into the late Greek variants of “Physiologus”, but in its Latin versions it did not receive any symbolic explanation. Pierre of Beauvais /11.160/ gives a more detailed description of the woodpecker. The silhouettes of magpies drawn in bestiaries at the end of the twelfth century were the first depictions of the birds which were true to life; they appeared before the famous sketch of a magpie in the album of Villard de Honnecourt (Hahnloser H. R. Villard de Honnecourt, Wien, 1935, tabl. 1).
who seems to have followed the tradition of the bestiary. Showing the typical combination of the black plumage with the white wings, the painter, for the sake of authentic depiction, deviates from the colour canons, though he still presents the silhouettes of birds in a symmetrical arrangement.