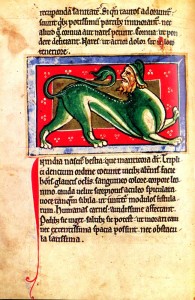 Manticora /manticora/ 10.1X6.1 cm
The tale of the manticora belongs to the latest additions to the tractates on animals derived from Solinus /52.31 /. The legend about the manticora — a terrifying monster which has three rows of teeth, a human face with bloodshot eyes, a lion’s body and a tail of a scorpion — can be traced to “Indica” by Ctesias /V. cent.B.C./, it is mentioned by Aristotle /11.501 a 24/ and Pliny /VIII.21.30/. The manticora is so strong and swift-footed that it can easily cover any distance. Manticora feeds on human flesh and is often depicted holding a human arm or leg in its teeth. Brunetto Latini repeats the story of the manticora in the bestiaries. /I.V.195/. The image of the manticora is closely related with a number of most complicated questions pertaining to the history of culture. It is a creation of the fabulous world, a half-man and half-animal. It was born to life in the imagination of the ancients and penetrated into the Romanesque and Gothic art. The painter of the twelfth century gives the head of the manticora the form which the grotesques of the late Middle Ages would have, since by that time the combination of human and animal forms would no longer look terrifying, becoming a lively play of animalistic and antropomorphic forms. Yet, these amusing, grimacing beings, to be seen in Gothic miniatures, whose past is too terrifying to remember, have retained a distant link with the fabulous vampires. These images of half-men and half-animals, chtonic in their essence, owe their emergence to the ambivalient nature of the ancient man’s outlook who was trying to unite what could not be united, to mock the horrible, in whose perception the world was in a permanent state of incompletion and change. The Middle Ages preserved the ground for their existence.