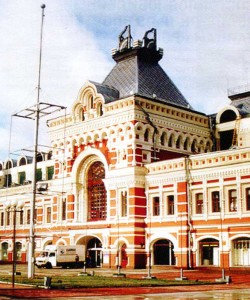 Being on the half way of the main water artery of Russia – the Volga, in immediate proximity to Moscow, Nizhniy Novgorod fair was doing the most important function of “exchange courtyard Europe with Asia”. Here was the sale of goods produced in the most remote regions of the world, but the main trading on it went with the East: China, Persia and Central Asia, the so-called “key trade with Asia”.

Nizhny Novgorod fair was the largest both in turnover and the size of the occupied its territory. Of exceptional importance of Nizhny Novgorod fair in the Russian economy was due to the fact that, while the timing of the last among other all-Russia fairs (from 15 July to 10 September), she summed up the results of a year of work of the whole national economy. It was established prices for basic products (tea, manufacture, metal, fish, salt, bread, fur and other).