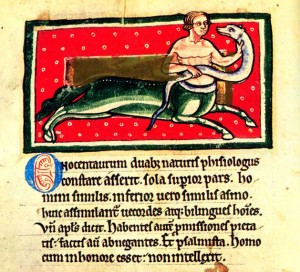 Onocentaur /onocentaurus/10X5.5 cm
The onocentaur of the antique mythology was included in “Physiologus” due to the Greek translation of The Book of Isaiah, in which the prophet announced the destruction and fall of Babylon, on the ruins of which “wild beasts will lie down” /Isaiah 13:21 — 22/. Among them the Greek translation gives ovoxevTaupog If in the Latin translation of St.Jerome dragons, ostriches, hyenas are mentioned, the early translation of the Vulgate speaks of sirens, demons, hedgehogs and onocentaurs. Following the biblical text, “Physiologus” speaks of the onocentaur which is half man and half ass and not about the centaur or the hypocentaur of the antique tradition. The influence of the biblical text accounts for the fact that in “Physiologus” the sirens and the onocentaurs are placed in the same chapter, the fact reflected later in some manuscripts /i.e. ms. 602, Oxford, Bodleian Library, f.10; Lat.Q. v.III N 1, State Public Library, Saint Petersburg, f.39/. The bestiary devotes to the onocentaur a whole chapter which is, in fact, a modified version of the relevant chapter in “Physiologus” on sirens and centaurs. The interpretation of the centaur as a creature which is simultaneously magnanimous and vile produces an image of a hypocrite, a heretic, a double-faced person keen on virture but in no way averse from sin. In the bestiary of Philippe de Thaiin /1109— 1116/ the onocentaur is treated as a sinner. Pierre of Beauvais calls onocentaur “sacraire” or “sagetaire” /IV.176/. By the name of “sagit-taire” it appears in the “Bestiary of Love in Verse” /2966 and further on/. The antique and medieval worlds relate the centaur with the zodiacal sign of Sagittarius /the Archer/ and thus picture it with an arrow and a bow. In the miniatures of the Saint Petersburg and the New York bestiaries one can see the rarest picture of a centaur with a snake, which in the Middle Ages, according to the vestiges of ancient chtonian concepts, was believed to be a creature of a most dual nature, an unrestrained confusion of Good and Evil. The young beardless face of the centaur in the Saint Petersburg and the New York manuscripts distinguishes him from the bearded centaurs of the medieval and the antique tradition.