The story of the parandrus whom Pliny /VIII.34.52/ calls “tarandrus” is derived from Solinus /30.25/. In the bestiaries and the writings by Pseudo-Hugh /Ш.9/ and Brunetto Latini /I.V.197/ the parandrus is an animal living in Ethiopia which has the tracks of an ibex, the branching horns of a stag, the colour of a bear, and, like a bear, it has a shaggy coat. It is believed to change colour into a likeness of whatever it is close to. Not caring much for reproducing the colour of the animal described in the text, the painter depicts the bright-green silhouette of the animal with beautiful branching horns against the red and golden background. 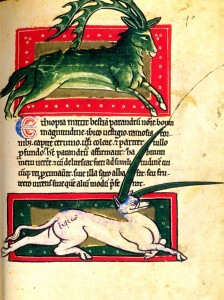 Yale /eale/ 9.8X3.9 cm
The information on the yale, another exotic animal of the bestiary, is derived from Solinus /52.35/. The yale is as big as a horse, has the tail of an elephant, his colour is black and he has the tusks of a boar. His horns are long and sharp. And again the author’s indications of the colour of the animal were ignored by the painter. It is still not clear what animal was called “yale” by the ancients. Cuvier thought it to be an antelope-gnu (Franklin A. La vie privee d’autrefois. Les animaux. Paris, 1897, p. 82.). Isidor does not mention yale. Pliny /VIII.77/ and Aelian /VII.5/ call an animal resembling the yale a “cato-blepas”. Yet, Albert the Great writes about “eale” /XXII.I.40/ and “catoblepas” /XXII.I.32/. The story of a yale is included in the work of Pseudo-Hugh /ШЛО/. The only old French bestiary in which the yale is mentioned, that of Pierre of Beauvias /III.223/, calls the animal “centicore” and mentions his enmity with the basilisk. In the late Middle Ages the yale became the favourite character of knightly heraldry and emblems.