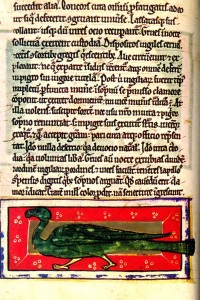 Parrot /psittacus, psitacus/ 10.2X4.4 cm
The text is taken partly from the story by Isidore /XII.VII.24/ and also makes use of the knowledge provided by Pliny /X.41.58/ and Solinus /52.43/. It is a green bird with a red collar which lives in India only. It imitates human speech and while it is young it can be taught to pronounce words. But when it grows old, the bird becomes absent-minded and slow-witted. The parrot’s hard beak saves the parrot when it happens to fall headlong on a rock. They story of the parrot uttering “Ave, Ceasar”, comes from Martial /XIV.73/. Pseudo-Hugh /111.28/, Pierre of Beauvais /11.186/, Albert the Great /XXIII. 1.101/ and Brunetto Latini /I.V.170/added new facts to the story.
The miniature illuminating the text about the parrot shows an anonymous bird with a beak and tail clearly outlined. It is rather frequently met in Romanesque sculpture as well. The parrot is often given a life-like representation in late medieval art, when the parrot, together with other exotic animals, became a usual attraction in court menageries /for instance, the representation of a green parrot in Jan van Eyck’s “Virgin of the canon Van der Pale”/.