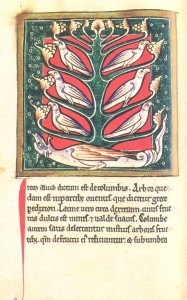 Peridexion Tree /arbor peridexion/ 9.8X9.8 cm
The Latin narattive of Peridexion tree, elaborating on the original Greek versions of “Physiologus”, is a continuation of the story about doves. It takes rise in the Evangelic proverb about a grown mustard seed /Matthew 13:31, 32; Mark 4:32/ or from the antique tale of the shadow of an ash-tree afraid of a snake /Pliny XVI.13.24/ (Lauchert F. Geschichte des Physiologus. Strassburg, 1899).
The Tree of Perindeus /oak of Perindeus in the Slavonic version of “Physiologus”/ grows in eastern lands. Its fruit is sweet and tasly. Doves take delight in the fruit and live in the tree. The dragon is the enemy of doves, but it fears the shadow of the tree. When the shadow falls to the west, the dragon moves round it to the east, and when the shadow comes to the east, he flees to the west. If, however, a dove happens to be outside the shade, the dragon would seize it. The bestiary extends the parallels, drawn in “Physiologus” between the tree of God the Father, between the fruit of the tree and Jesus Christ and his wisdom, the tree’s shade and the Holy Spirit; the doves and the faithful.
Albert the Great in the chapter about doves mentions the tree of Perindeux and the dragon living under it though he does not give it any symbolic meaning /XXIII.1.32/.