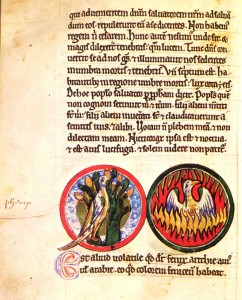 Phoenix /phoenix, fenix/ two medallions 4.1 cm in diameter each
The legend of the phoenix, which originated in the sphere of ancient oriental symbolism, occupies pride of place in Greek and Latin culture and is widely interpreted by medieval writers (Hubaux J., Levy M. Le Mythe du fenix dans les litteratures greque et latine. Liege, 1939).. It is one of the oldest and widely accepted symbols of rebirth and renovation. In the words of Albert the Great “the phoenix is studied by a science which is divine rather than natural” /XXIII.43/. The legend of the phoenix is narrated by Herodotus /11.73/, Pliny /X.2.2/, Aelian /VI.58/, and Solinus /11.33/. It is given an interpretation by Tertullian /De Resurrectione carnis, PL, v.II.col.857/, Lactance /De ave phoenice/, and St. Ambrose /V. 23, 79/. Following Isidor /XII.VII.22/, the bestiary derives the name “fenix”, or “phoenix”, from purple-red /phoeniceus, feniceus/ plumage of the fabulous bird.
The chapter of the bestiary about the phoenix is, in fact, a combination of two stories belonging to two different versions. The first one is close to the text by Isidor /XII.VII.22/ and the text from “Aviarium” /49/, and is a brief account of the legend about a phoenix who burns himself in the fire, kindled by the heat of the Sun and then rose from its own ashes. He draws a parallel with the sacrificial death of Christ and his ressurection.
The second story is a more detailed narration arising from the original Greek text reproduced by St.Ambrose /V.23.79/. The phoenix lives in India. Once in five hundred years he comes to the gardens of Lebanon, fills his wings with the sweet scent of oilments and indicates to the priest of Heliopolis the month of the Egyptian calendar, which is sarinath or famenoth, i.e. March or April. At this sign the priest puts the sacred twigs of the rod on the altar. “And here comes the bird and enters the town of Heliopolis, its wings smelling sweet”. It burns himself and the next day the priest finds in the ashes a worm emanating the most fragrant scent. On the second day the worm grows into a young bird and on the third day it is a phoenix again. The bird bids farewell to the priest and flies back to its old habitation. This version of the legend widens the symbolic interpretation of the tale about the phoenix who comes to symbolize the Saviour descending from heavens, his wings full of divine gifts.
“Aviarium” /49/, proceeding from the text of “Physiologus” in the story of the bird’s resurrection, seems to take the hint as hope for resurrection from the dead. Philippe de Thaiin /2217—2203/ compares the phoenix to the swan. Gervasius /1021 —1046/ believes that the bird fans up the fire by his wings while Guillaume le Clers /739—786/ says that phoenix strikes fire by his beak. Pierre of Beauvais /11.182/ gives a colourful depiction of the bird. In the love lyrics of Provance the comparison between a man burning in the fire of love and the phoenix was common. It was further developed in “Bestiary of Love in Verse” /1172/ and other “bestiaries of love”. Chretien de Troyes /Clijes, 2725/ admires the beauty of the proenix, Brunetto Latini /I.V.164/ relates the text of bestiary calling the text “li contes” /fairy-tale/. The miniatures of the bestiary give two traditional depictions of the phoenix: one showing the bird collecting twigs for the fire and the other — the phoenix renewing himself in the fire.