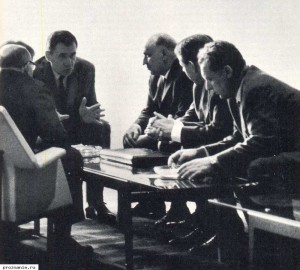 The Soviet Union, which had seen Israel destroy or capture the jet fighters, tanks, and rockets it had supplied to the U.A.R. and Syria, then called for an emergency session of the 122-nation General Assembly to be attended by the heads of government. The Kremlin and the White House, using the Hot Line, conferred repeatedly during the June war, assuring each other they would not take part in the fighting. This refusal to escalate was reaffirmed despite false Arab propaganda charges that U.S. and British planes were providing air cover for Israel, and also during a dangerous period of uncertainty following an attack by Israeli planes on the U.S.S. Liberty, an American message-relay ship cruising in the Mediterranean near the Sinai battle area.
Premier Aleksei Kosygin repeated the Soviet demand for UN condemnation of Israel and called for the withdrawal of Israeli forces when the General Assembly met in emergency session June 17 to July 21. Two heads of state, 14 prime ministers, and many other officials attended, but the Assembly was able to muster the necessary two-thirds vote only two subjects. One involved the status of Jerusals the other concerned war victims.

Russia’s celebration of the 50th anniversary of the Bolshevik revolution
October 9, 2011
Go to Top