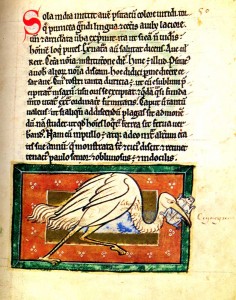 Stork /ciconia/ 10×6 cm
The text which depicts the stork as an enemy of serpents and a herald of spring is taken from Isidor /XII.VIII.16—17/. The name “ciconia” is an ono-matopoec word as it imitates the sound produced by storks. It is first mentioned by Ovid /Metamorphoses, VI.97/. Pliny says that old storks are looked after by the young /X.23.31—32/. This is mentioned by Aristotle /IX.615 b 23/. “Aviarium” /42/ identifies the parental love of the storks with the love of the tutor for his pupils. Albert the Great /XXIII. 1.24/ expands the story of the bestiary and Brunetto Latini /I.V.161/ tells the story of how a crow’s egg was put into the nest of a stork. In the miniatures of bestiaries storks are depicted with a frog or a snake in the beak. Storks are often to be seen on the reliefs of Romanesque and Gothic churches, illustrating popular fables /e.g. the relief of the Cathedral in Bourges/.