The Telephone and Telegraph Offices 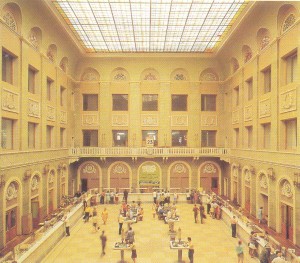 But to return to Ulitsa Sadovaya. The most prominent building is that of the Telephone and Telegraph Offices (Dom Svyazi) (No. 10) built in 1902-1903 by the St. Petersburg architect Vladimir Kharlamov. Wishing to create a monumental building, he overdid the decorations of the facade with too many arches, and heavy cornices and loggias, but the interior was geared to

the function of the building. It has an immense hall of three storeys (21 metres high), with a frosted glass ceiling. The building was badly damaged during the war, but was restored in 1963. Where Ulitsa Sadovaya crosses the Ulitsa Krasnoy Gvardii (Red Guard St.) another old Odessa building stands, the New Market built by Arkady Todorov at the end of the last century.