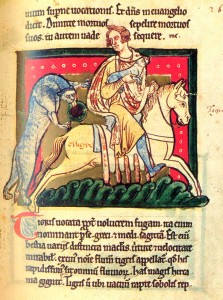 Tiger /tigris/ 9.7X8.3 cm
The story of a tiger is one of the most moving and poetical tales of the bestiary. It proceeds from Isidor /XII.II.7/ and St. Ambrose /VI.4.21/ who derived information from Solinus /37.5/ and Pliny /VIII.18.25/.
The tiger gets his name for his speedy pace, for the Persians and the Medes used to call an arrow “tygris”. This explains why the River Tigres is named as it is: it is the swiftest of all rivers. Hyrcania is the land where tigers live. When a tigress finds out that one of her cubs has been stolen, she darts along the tracks and catches up with the thief. But when the tigress is close, he throws down a glass ball and she, mistaking her own reflection for her cub, begins to caress it. On discovering the deception she, beside herself with rage, resumes the pursuit. He throws down a, second glass ball and she is again deceived, and giving way to despair, she gives up her chase. The story of the tigress is preserved in writings by Albert the Great /XXII.1.100/ and Brunetto Latini /I.V.199/. Pierre of Beauvais wrote that the tigress enjoyed looking at herself in the looking glass so much that she forgot all about her cub /11.140/. The bestiaries of Philippe de Thaiin and Guillaume le Clerc do not include the story of the tigress. The “Bestiary of Love in Verse” /963/ interprets it in the spirit of love lyrics.
The compositional design of the miniature illuminating this story has gone almost unchanged from one manuscript to another. It shows the swift movement of the horse; the graceful half-turned pose of the rider, his legs set tight against the stirrups, a small tiger cub in his arms; the tigress in a jump over the looking glassball. As if charmed by the magic band, the figures on the bright surface of the background, have come to a sudden halt contrasting the movements of the silhouetts and producing a Romanesque effect of “moving immobility”.