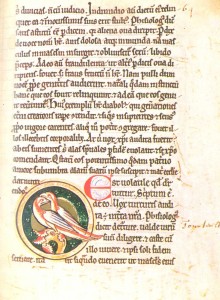 Turtle-dove /turtur/ medallion 4.7 cm in diameter
The chapter about the turtle-dove in Latin “Physio-logus” and in the bestiaries differs from that of the first Greek versions. It repeats the quotation from the Song of Solomon /Song 2:12/ about the voice of the turtle-dove foretelling the approach of spring but ascribes to her the qualities which in most Greek versions were attributed to the crow which remained faithful to her dead husband.
The story of the turtle-dove’s marital faithfulness is included in some versions of the Greek text (Karneev A. op. cit., p. 319.). In the “Hexaemeron” by Basil the Great it is followed by a moralization addressed to the wives. The Latin versions of “Physiologus” and the bestiaries extend this moralization, holding up the turtle-dove as an example for the contemporary wives to follow and identify the bird with the Holy Church always faithful to Christ. Of all the eastern versions only the Armenian translation (Marr N. op. cit., p. 127.) mentions the bird’s love for seclusion and lonely places, which is taken up and developed in the Latin versions of the tale about the turtle-dove, beginning with Isidor /XII.VII.60/. The bestiary includes borrowings from St.Ambrose /VI.4.23/ and Isidore who explains the name “turtur” by its cooing. In “Aviarium” /25/ the story of the turtle-dove is included in the chapter about a palm-tree identified with the image of the Church. Just like the turtle-dove feeds her younglings in the nest, the Church feeds the faithful with spiritual food. The marital faithfulness of the bird and her identification with the Church are the main motifs of the poetical narratives given by Philippe de Thatin /2547—2555/ and Guillaume le Clerc /2649—2736/. Brunetto La-tini /I.V.172/ and Albert the Great /XXIII.I.105/ also give the description of the bird’s tender image. The painters of bestiaries show two birds lovingly touching each other by their beaks.