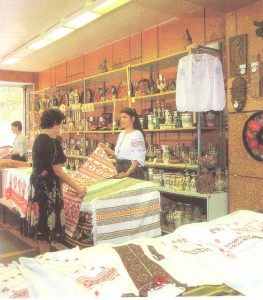 Deribasovskaya with its numerous shops is one of the main shopping centres of Odessa. There is the Ukrainian Souvenir shop, Sputnik (watches and cameras), Dom Knigi and Medkniga (two big bookshops, the second specialising in medical literature); there are also numerous cafes, kiosks, and stalls. Like elsewhere in the city, on Deribasovskaya, there are automatic mineral water vendors. They look like public telephone booths, only they are blue. For one kopeck, you will get a glass of sparkling soda water, for three, a fruit syrup is added. On a hot summer day you can quench your thirst, without dropping into a cafe or restaurant. Apart from the street automats, there are also mineral water vendors in the shop Kuyalnik (17 Deribasovskaya UL), or you could try the Russian national soft drink-kvas, sold in glass mugs from cisterns. And practically at every street corner icecream is on sale with all the many different varieties being produced in Odessa.

At the end of Deribasovskaya we cross the street by the underground pass and turning to the left find ourselves on Soborna square (Soviet Army Square). This is where the monument to M. Vorontsov, Governor-General of Odessa from 1823 to 1844 stands (sculptor, F. Brugger, 1863). The square with its garden is a convenient and pleasant spot to rest your legs. There is a big circular fountain, and a smaller one shaped like a cave, built in 1873 to mark the commissioning of the waterworks which brought water along pipes to Odessa from the Dniester River.