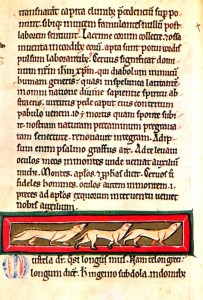 Weasel /mustela/ 10.3X2.4 cm
Empedocles and Anaxagoras shared the antique notion that the weasel conceives by mouth and gives birth by ear, the notion which Aristotle called “a naive and rash utterance” /On the Origin of Animals, III.756 b 15/. Neither Albert the Great /XXII.I.79/ nor Brunetto Latini /I.V. 181/ mention it and still “Physiologus” uses it as a pretext for a symbolic moralization. It associates the weasel with a man who willingly accepts the seeds of God’s word but then puts them away through the ears and forgets what he has heard. The story of “Physiologus” included in the bestiary precedes the description of the weasel derived from Isidor /XII.III.3/. Isidor said that the name of the weasel, “mustela”, meant “a long mouse” /from the Greek

meaning “long”/. He distinguished two kinds of weasels: the wild ones living in the forest /their Greek name is “ixu6eg” that is, ermines and the ones dwelling in houses — ferrets. To keep their young out of danger the weasels take them from one place to another, they kill mice and snakes. “Physiologus”, proceeding from the popular belief that the weasel and the snake were enemies, joined to the story of the weasel that of the asp who used to stop his ears not to hear the enchantments of the snake-charmer. The mention of the asp to be found in “Physiologus” emanating from the text of the psalm /Psalms 58:4—5/ in version “B” comes to be a long and full story of the asp, which in the manuscripts of the twellfth century takes up a whole chapter. The asp comes to symbolize the sinner who remains deaf to the call of the church.
Philippe de Thaiin /1217—1228/, Gervasius /1137— 1144/, Guillaume le Clerc /2419—2436/ and Pierre of Beauvais /11.148/ repeat the story of the weasel’s conception.