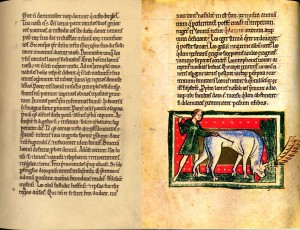 Antalop /antalops/ 9.4 х 6 cm
The text on the antalop provides no clue for identifying it with the antelope we know. The text reproduces the narrative of “Physiologus” and is also given various intepretations in the writings by Pseudo-Hugh /II.2/, Pierre of Beau-vais /11.116/, Brunetto Latini /I.V.177/ and in the versed bestiaries of Philippe de Thaun /757—798/, Gervasius /449—472/ and Guillaume le Clerk /239—278/.
The antalop is so truculent that no hunter can ever get near him. His horns are so sharp at edges that he can cut down big trees. Thirst brings him to the great river Euphrates, but as he drinks his horns get entangled in Herecine shrubs at the river bank. When he bellows for help a hunter comes and kills him. The antalop’s horns symbolize the Old and the New Testaments. Setting hope on these horns Man is able to overcome the vices of avarice, envy, arrogance, homicide, lust, drunkunness and adultery. As compared with the early versions of “Physiologus” the text gives a longer list of vices overcome by the devotee. Finally, it warns Man against the thick shrubs of vice and asks him not to be entangled in the weeds of lust, so as not to be slain by the Devil.