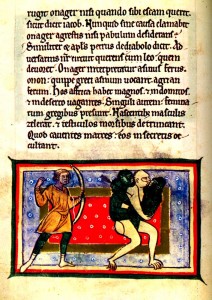 Apes /simia/ 10.2×6.2 cm
In the Latin versions of “Physiologus” and in bestiaries the text about the ape follows the story of the onager.
The story presented in the bestiary is in fact a combination of passages from Isidor with the symbolic interpretation of “Physiologus”, though it does not associate the features of the monkey with those of the onager.
The ape is a horrible and ugly creature. Because of its resemblance to a human being and a gift for imitation, people saw the Devil in it. The story taken from Isidor /XII.II.31/ relates that the ape gets merry when the moon is full and he is sad at the time of the new moon. The bestiaries also include the ancient story about the children of the monkey originating from the tale by Aesop /Fables, 218/ The Fables of Aesop. M., 1968, p. 126 (in Russian) which is also to be found in the bestiaries of Philippe de Thaiin /1889—1899/, Gervacius /361—366/, Guillaume le Clerc /1927—1942; 1953—1964/, Richard de Fournival /19.3/, Pierre of Beauvais /III.230/ and in the anonymous „Bestiary of Love in Verse” /449,867,2387/ as well as in the work of Brunetto Latini /I.V.198/. The bestiary repeats the text by Isidore /XII. 11.30—33/ who, after Pliny /VIII,54.80/ and Solinus /27, 56—60/, distinguishes five types of monkeys: the caudate /cercopithecus/, the hirsute /sphinx, cynocephalus/ with a dog-like head, the satyrus and the callitrix. Like many bestiaries of the twelfth century, it unites the latter two stories into a separate chapter. The picture, enacting the story of the monkey children, becomes a traditional illustration to the chapter on it. When chased by a hunter, the monkey lifts the child she likes best, while the other one, whom she does not like climbs the mother’s back. But when she is exhausted she has to throw away the one she carries in her arms while the other clings fast to its mother’s back. This scene is full of sentimental naivety.