France, Saint-Paul-l?s-Durance, July 28, 2020. The ceremony marking the start of the machine assembly of ITER, the international experimental tokamak nuclear fusion reactor, has taken place online. Russia plays a significant role in this project’s development, alongside the member states of the European Union, United States, India, China, South Korea, and Japan.

The assembly and installation stage of a tokamak reactor is a momentous event for the global scientific community. ITER, as the world’s largest magnetic confinement plasma physics experiment, intends to reproduce the thermonuclear power of the sun on Earth for energy purposes. Once completed, it is hoped that ITER will provide mankind with a reliable and efficient source of energy for millions of years. The reactor operates on the principle of nuclear fusion and requires seawater and lithium as raw materials for its fuel.

French president Emmanuel Macron took part in the ceremony. “When the United States, Russia, China, Japan, Europe, India and Korea contribute their best scientists and expertise for the common good, it is proof that what brings together people and nations is stronger than what pulls them apart,” said Macron in his speech. ITER Director General Bernard Bigot, who conducted a virtual tour of the site, amongst other activities that day, also spoke at the ceremony alongside the government representatives of other participating countries. 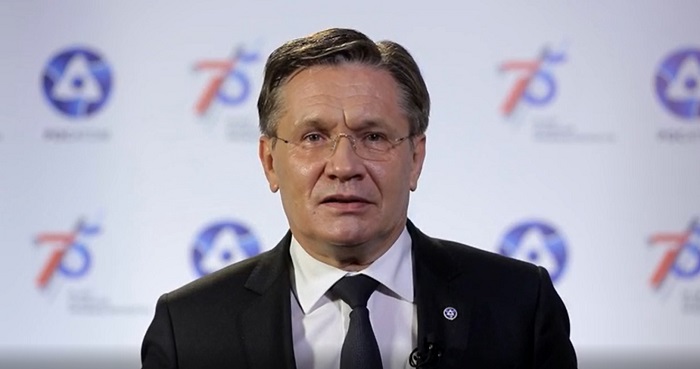 ROSATOM Director General Alexey Likhachev read an address to participants prepared by Russian President Vladimir Putin. “ITER, which is the largest international scientific and technical project in history, is a vivid example of efficient and mutually beneficial multilateral cooperation. As you know, Russia is one of the founding countries of this initiative that aims at making a significant contribution to ensuring energy security of mankind and plays an active role in its implementation. The ITER Project is based on the concept of the Tokamak facility invented and developed in our country. Today the ITER project is entering a decisive stage in its implementation. Despite the restrictions due to coronavirus pandemic, we managed to maintain an uninterrupted pace of work. This gives us good ground to expect the project goals to be achieved on schedule, and in the foreseeable future we will receive a source of energy that is unique in its power and safety; the operation of which will undoubtedly contribute to solving sustainable economic development goals and improving the quality of life of millions of people. I would like to sincerely thank everyone who has been working on the ITER Project for many years.” Vladimir Putin also thanked all of the individuals who have been working on the ITER project.

Alexey Likhachev said that the start of assembly is a major event for the entire fusion community and for all of science. “It is important to note that despite the restrictions caused by the coronavirus epidemic the assembly and installation works start as scheduled. The main task for all of us now is to ensure timely completion of the installation and assembly and to obtain the first plasma by the end of 2025. This will allow us to demonstrate in practice the concerted action on the part of all the Project participants and the resultant effectiveness of our international cooperation,” said Likhachev.

Likhachev noted that the ITER project is a vivid example of open scientific and technological cooperation and underlined that Russia is fulfilling its obligations within the ITER Project through unfailing in-kind and financial contributions in strict accordance with the schedule. “Russia has its fair share of credit in the reactor assembly beginning on time: the vacuum vessel upper ports and power supply busbars were timely manufactured and supplied to the partners and to the ITER site.”

Dr. Viktor Ilgisonis, a member of ITER’s International Council and ROSATOM’s Director of Scientific and Technical Research and Development, said: “The ITER project was launched in 2007 and has since been the largest scientific project in history in terms of complexity, cost, and potential significance for humanity … based on the results of [this project], we will be able to judge whether the thermonuclear dream of an inexhaustible and safe source of energy will become a reality in the 21st century.”

Notes to the editor

ITER is an international experimental thermonuclear reactor based on the concept of a tokamak – a Soviet-developed device that uses a magnetic field to draw hot plasma into a torus (a revolving three-dimensional circle). One of the most prominent examples of international cooperation in the development of nuclear power, this scientific “mega project” intends to demonstrate that it is possible to control thermonuclear fusion on an industrial scale. The project is being developed by the member states of the European Union, alongside Russia, United States, India, China, South Korea, and Japan.

The idea of building an international fusion reactor was initially introduced in 1985 by Mikhail Gorbachev and supported by presidents Ronald Reagan and Fran?ois Mitterrand. ROSATOM is responsible for the fulfillment of Russia’s obligations in the framework of the ITER project. The “ITER Project Centre” coordinates all activities.

Russia contributes to the ITER project in several ways: guarantees funding for the ITER Organisation’s budget; manufactures and delivers 25 pieces of sophisticated high-end equipment; provides Russian personnel for the completion of the ITER project. Participation in the ITER project is supported by scientific and engineering teams from different enterprises throughout Russia, enhances cooperation with other institutions and organisations, and ensures that qualified specialists are trained in a number of Russian universities (National Research Nuclear University MEPhI, Moscow Institute of Physics and Technology, NSU, LSU, and Lomonosov MSU, amongst others).