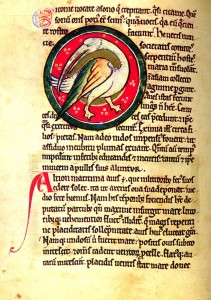 Haltion /halcyon/ medallion 6.1 cm in diameter
The alcyon, the halcyon of romantic poetry and the “alkonost” of ancient Russian folklore, is a sea-bird. Halcyon was fabled by the ancient to have the power to charm winds and waves into calmness. In the middle of winter the bird lays eggs in coastal sand. For seven days when the halcyon is hatching the eggs and for another seven days the sea stands calm and violent winds subside into a soft breeze. The text of the bestiaries and that of Pseudo-Hugh /111.29/ is taken from St.Ambrose /V.13.40/, though it does not include the symbolic interpretation given by the latter. St.Abrose considers the halcyon a symbol of Divine Pursuit, which is similar to what Basil the Great described in his “Hexameron”. The story of the halcyon takes rise from the antique writers /Aristotle, v. 542 b 4; Pliny, X.32.47/, it is repeated in Isidor /XII.VII.25/. “Aviarium” does not include it. Albert the Great /XXIII.I.II/ and Brunetto Latini /I.V.152/ repeat the story of the sea suddenly growing calm.
The bird on the surface of a medallion curled in a spiral and biting her own tail, is one of the oldest zoomorphic motifs used in the ornamental patterns of ancient and medieval art.