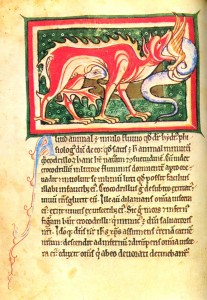 Hydra /hydrus, hydra/ 10X6.8 cm
The bestiaries of the twelfth century and the text by Pseudo-Hugh (II.7) follow the story by Isidor /XII.IV.22, 23/ who continued the story in “Physiologus” about the unceasing hostility between the hydra and the crocodile living in the Nile. When the hydra saw the crocodile sleeping on the bank with his mouth open, it slipped into the crocodile’s mouth and split his intestine and came out safely at the other end. Thus, the crocodile is symbolic of Death and Hell while hydra symbolizes Jesus Christ who descended into the Hell and led out the sinners. The fight between the hydra and the crocodile symbolises Redemption.
In Greek “Physiologus” where hydra was described as a dog and called evudpig or 8vn6pog, it was the otter that was meant. In the Latin versions the description of this animal was being gradually lost and the otter was turned into “ydris” and then into “hydris” or “hudra”. Isidor describes a fight between the hydra and the crocodile, calling the hydra “enhydros” /XII.II.36/, and perhaps distinguishing it from the creatures described by him in the sectioon “On Snakes” /enhydros (XII.14.21), hydros (XII.IV.22) and the many-headed dragon hydra, the hydra of Lerne (XII.IV.23)/. Isidor mentions hydras also in the section on monsters: in XII.II.34 he speaks about hydram, the nine-headed Hydra of Lerne, and in XI.III.35, about the water hydro, which St. Abrose associates with heresies. The hydra’s fight with the crocodile was included into the poetical bestiaries of Philippe de Thaun /703—718/.
The tale of the hydra’s fight with the crocodile inspired the medieval painter impressively to portray fantastic animals. The stylized figures show that entwined animal forms were traditional in medieval artistic thought.