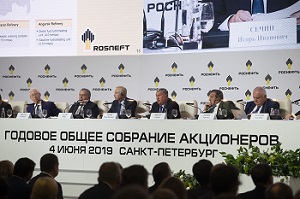 The Annual Shareholder Meeting of Rosneft Oil Company is held on June 4, 2019 in St. Petersburg. Rosneft Chief Executive Officer Igor Sechin held a keynote speech reviewing the results of the Company’s work in 2018.

«Rosneft is the largest oil and gas company in the Russian Federation, as well as globally in terms of reserves and production of liquid hydrocarbons among public oil and gas companies», stressed Igor Sechin, addressing shareholders. The company is demonstrating sustainable growth in economically viable hydrocarbon reserves.

«Rosneft’s share in oil production in the Russian Federation is about 41 %, and in global production – 6 %. In 2018, Rosneft confirmed its position as the largest Russian taxpayer and core company. Annual tax payments reached a record level in the entire history of the Company and amounted to 4 trillion rubles, which is one and a half times more than in 2017», said Rosneft CEO.

Igor Sechin reminded that market capitalization of the Company has grown by more than 40 % since the approval of the Rosneft-2022 Strategy, despite the oil market volatility. It is evidence that the investment community highly appreciate management’s work. As a result, Rosneft for the first time entered the world’s top-10 oil companies by capitalization. 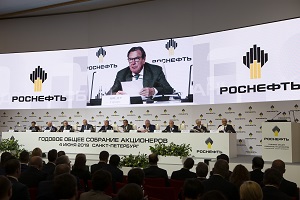 Rosneft CEO emphasized that the Company does not intend to stop there and is consistently working on development of greenfield projects.

On the day of the Annual Shareholder Meeting, Rosneft put into commission the West Erginskoye field that is the part of the Erginsky cluster. During the video conference, Rosneft CEO Igor Sechin gave the order to start shipping the first oil.

According to Rosneft CEO, in 2018 a significant contribution to the growth of production was made by the launch of four large new projects – Tagul, Russkoye, Kuyumbinskoye and the second phase of Srednebotuobinskoye field.

«In the coming years, Rosneft is planning to continue developing existing fields and to prepare to launch the Lodochnoye, North-Komsomolskoye, and North-Danilovskoye fields, as well as new fields at the Erginsky cluster», said Igor Sechin. «In 2018, Rosneft retained its leadership in the oil industry among public oil and gas companies in terms of unit production costs. On yearly average, they were around 3.1 dollars per boe», he added.

According to Sechin, in line with the company’s Strategy up to 2022, new projects will account for around 20 % of overall liquids production, with the potential for further growth dependent on exploration work.

As part of the annual meeting, Gerhard Schroeder, Chairman of the Board of Directors of Rosneft, also made an opening speech to the shareholders. In his address, he noted that the dividend policy of the Company, which implies payment of 50 % of net profit to IFRS as dividends twice a year, is an additional factor of increased investors’ interest in Rosneft’s securities.

«In the H1 of 2018 only, 155 billion rubles were paid, and successful annual results will ensure an unprecedentedly high level of annual dividend in the amount of 274.6 billion rubles, significantly increasing the yield for shareholders», said Chairman of the Board of Directors. 137.3 billion rubles of this amount will fall to the state.

In turn, BP CEO and a member of the Board of Directors of Rosneft, Robert Dudley, noted that «the Company is determined to be the leader in the area of industrial safety and labor protection, and firmly focused on preserving the environment for future generations. And these are exactly the areas where high achievements will be crucial for the Company’s future success», said Dudley.

«Investors of oil and gas companies are increasingly asking to provide assurance that their strategies are consistent with the goals of the Paris Climate Change Conference», BP CEO noted. – «Taking this into consideration, I am pleased to note that when reviewing the principles of Rosneft in the area of sustainable development, the Company’s Board of Directors approved the public attitude of the Company towards compliance with the Sustainable Development Goals of the UN.»

Presentation to the report on first item on the agenda of the Annual Shareholder Meeting of Rosneft Oil Company «Approval of the Company’s Annual Report» (June 4, 2019, St. Petersburg)