On and Off the Trans-Siberian Train: The Dropouts 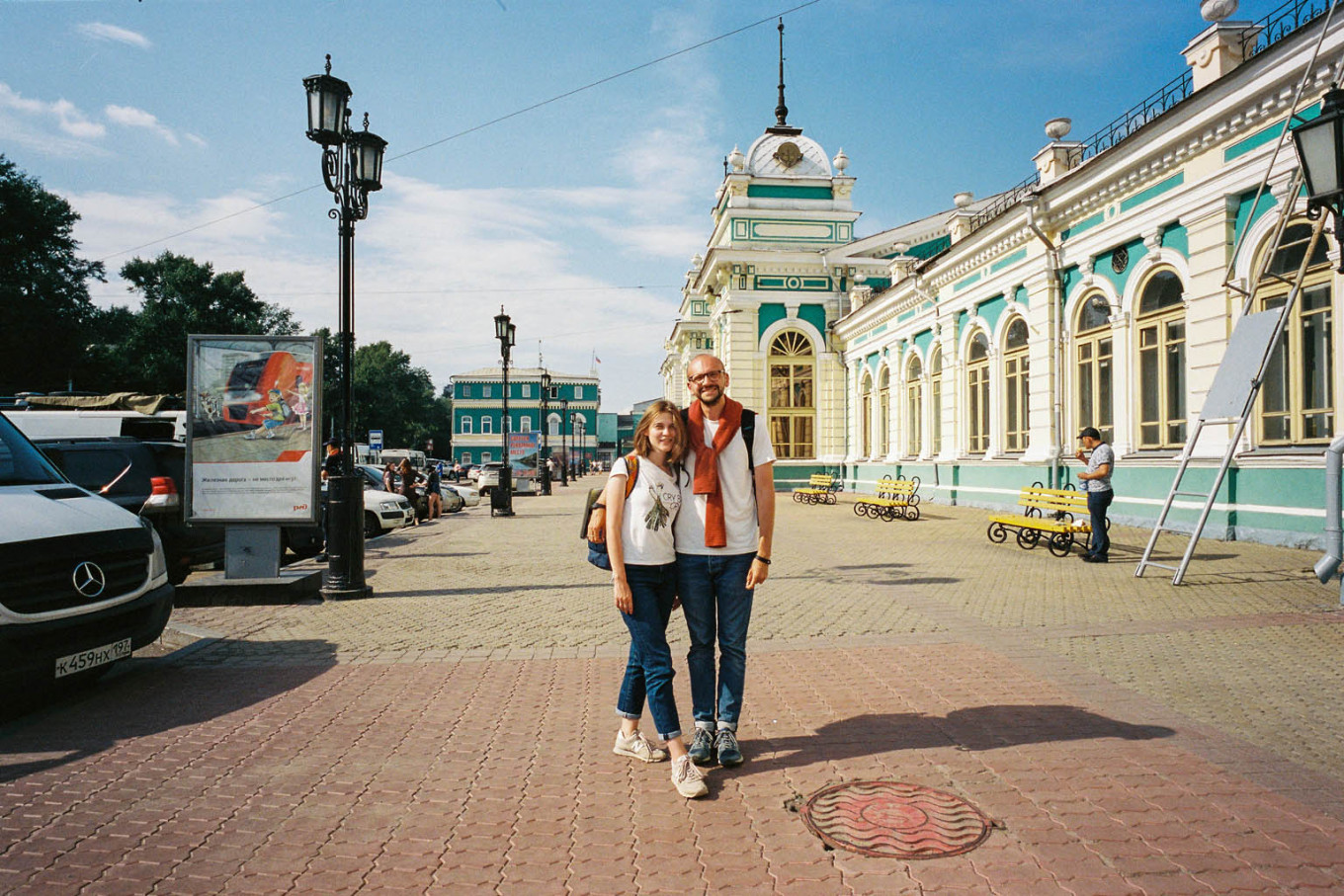 It’s day 14 of our travel, and we leave Baikhal to Irkutsk after a-four-day stay on a beautiful island of Olkhon. As we get inside Bukhanka, a cramped old Soviet mini bus that takes us from the island back to Irkutsk, we start talking to a young couple. The oddity of this encounter is that we had been staying with them in the same hotel for entire four days, but only the magic of a long road started the conversation.

They proudly tell us that this Baikal trip is a reward they booked for themselves after completing Teachers for Russia, a program that sends talented professionals from big cities to teach at schools. To remote villages, in the middle of nowhere.  For two (!) years. Mostly for kids from difficult families.

When we asked if we could record a story, they say “yes” simultaneously. They tell us they want the story to be big, to inspire other people by their example. The recorded sound of the interview is terrible; the bumpy road, reckless driving and no seat belts at the back of Bukhanka make the microphone jump back and forth. It’s also them talking at the same time, constantly interrupting each other. Like the three-hour ride ahead of us would not be enough for them to share what they’ve been experiencing for the last two years.

Now, meet Natasha and Pasha, both 27. Their backgrounds are very similar: both were born in remote towns in Russia, but went to good universities (in Saint Petersburg and Moscow). Both went to study abroad (to Germany and Spain), securing good stable well-paid jobs in Moscow upon their return. Both had no prior teaching experience. But chose to give this all up to move to a little village to become teachers.

Pasha: I never thought I would become a teacher. This idea never came to me even in the worst nightmare, it was not prestigious and not cool. I was working in consulting.

Among my friends and ex-colleagues I had a circle of acquaintances whose priority was to make money or attain something prestigious.  Things like which company you work for and career aspiration was their agenda. And it surprised them when I abruptly decided to go, but not to “downshift” in some magic place like Bali, but to become a village teacher.

Natasha: When I was getting my masters degree in Spain, I realized that it was important for me to live in Russia. A sudden feeling of patriotism arose inside of me. It became important, what is going on back home, I wanted to exist in this political and social sphere. I didn’t care what was going on in Europe and Spain, who was their president, what the prices were. I wanted to speak Russian with Russian people. That’s why I came back.

To be selected for the program, I had to go through five steps: application, interview, competition and Skype interview. There is also a summer institute where you give your first lessons and your learn how to communicate with kids.

For a long time I was hiding my plans while applying for the program. On my birthday I decided to unveil my plan to leave for a village to my friends. I thought they would not criticize me (it was my birthday, for God’s sake), but they said I was crazy that it was horrible. My parents were the same, “What do you mean, going to the village, what if you decide to stay there?” But at that point I was sure it was necessary, and left.

Pasha: We were teaching at Moscow region school in Karinskoe village. 70 km is not a big distance from Moscow, but sometimes it felt like it was 7,000 km. As a part of the program teachers from all regions take kids to Moscow to attend a theater festival. I can totally understand when children from a very remote village, like Demyan Bedny of Tambov region, have never been to Moscow. But it is shocking, when 15-year old students from this tiny village nearby Moscow have never made it to the capital. They have not been to Red Square, they have never been on the subway, because they can’t afford a ticket for 50 rubles with a school discount. Needless to say, they can’t afford to go to a museum.

When I, a hipster from Moscow, showed up at a village school, I heard swearing at a lesson for the first time. First it was not addressed to me, yet, I brought their attention to it and asked them to speak in a proper way. But later, it turned out they were just shy in the beginning. In two or three months we got used to each other and I heard “F*** you” for the first time addressed to me from a student.

Natasha: During the first three months I would call my parents, and would start crying when they asked me how I was doing. And I was doing OK, I had everything. I was healthy physically, but it was very hard from this pressure and from how personal your work is. They can tell you to go to hell, and you cannot tell if they do it to you as a person or as a teacher. These borders erase fast.

A teacher and a student are very conventional roles. Sometimes I’d be talking to students about video games during a break, but as soon as the bell rang, they interrupted the lesson. Because from this moment on, you are a teacher, and everything is your fault. It is truly unsettling.

Pasha: As you communicate with a student’s parents, you often see where the roots of many problems are. I was preparing one high school student for his talk at a conference. He was an A student, but preparation was tough, because he would always devalue everything. When somebody expressed opinion (including himself), he would only say, “This is nonsense. I will not speak about that. What I am saying is shit.” I began to wonder if he got any approval at home.

At the conference I realized what the deal was. The guy’s parents did not like the topic of video games he chose. After his talk they started to drag their own son down with questions. It must have really hurt. Don’t you expect that your parents will support you during your first public speech? But he resolved the situation well. He looked at the audience and said, “Well, see? Typical parental situation.”

Natasha: During my first year I had few success stories. A lot of failure stories. There were many days when I would come home, just lay in my bed, and think, “Why am I doing this?”

Children mirror you, they reflect you from the inside. You don’t see yourself from outside, and they can see your worst fears, complexes, they figure out your doubts and suppress them. Even if the lesson is perfect according to all standards, if you think that it will not work, it will not work. And your lesson might not be ready, but if you are confident, it might work out at the end. For me those two years were all about confidence. If I can manage to teach a lesson for a group of 16 second-graders, I can do anything in this life.

Pasha: I became more open-minded. It is very hard without it at school, it would never happen in a regular job. In the village everything is close and your personal space is non-existent. One night before an important graduation exam in social studies I came out to my balcony to have a smoke. I see my student hanging out outside. I yell at him from my balcony, “Danya, are you serious? The exam is tomorrow! Go home and sleep.”

I never liked public speaking, a mere idea of it made me nervous and I avoided it. As a teacher, every day is public speaking, and in two years I mastered it. School is a big test for your resilience. Stress at school comes from different sources: from school administration, children, colleagues. You always have to be ready to communicate.

Natasha: It’s like in “For Whom the Bell Tolls.” The bell tolls for you. If not you, who else would do it? If everybody leaves Russia, what will happen here? It’s much cooler to stay here and to contribute to change, than to work for somebody and try to survive in a foreign country. When you live abroad, you will always be an immigrant. You will never be a person fully belonging there. Here you belong, than why not bring change to your home country? There are opportunities.

Pasha: I would not preach to anybody to stay in Russia. I wanted to leave myself. And now there are moments when I feel like going away. But it has to be a personal choice. My choice has been to stay and work here. I am surrounded by my language, my literature. If I want to immigrate one day, I will leave. But I don’t feel like running away from anything. If you are trying to escape from something, you will always end up on the run. If you have a chance to go and work in some cool place, then come back, and then go somewhere else – that’s for me.