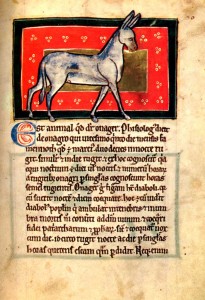 Onager /onager/ 10X6 см
The text of the bestiary about the onager combines two narratives of Greek “Physiologus”, the one about the onager castrating his young offsprings “for them not to multiply”, and the other about the onager and the monkey registering time. “Physiologus” compares the onager castrating his young ones with the Apostles preaching continence and calling for heavenly life in contrast to patriachs multiplying their carnal seed. The bestiary says that in the month of famenoth /the mention of famenoth of the Egyptian calendar corresponding to March points to the place of the origin of “Physiologus”/ the onager begins to bray twelve times in the day and in the night. The animal symbolizes the Devil awake in search of prey and equating night and day. The mother onager has to hide her young for fear that their father should want to castrate them out of jelousy. Pliny /VIII.30.46/ mentions the jealousy and lust of the onager.Job’s words about the viciousness of the onager /Job, 39:5/ determined the character of the animal in Christian literature, including the writings by Isidor /XII.I.39/, Pseudo-Hugh /II.11./, Pierre of Beauvais /III.224/, Philippe de Thaiin /1827— 1850/ and Guillaume le Clerc /1843—1880/. In the “Bestiary of Love in Verse” the wild nature of the animal is compared to the behaviour of a man in love.