Over 850 Supplier Companies Participated in the ATOMEX 2018 International Forum

On December 4, the 10th International Forum of Nuclear Industry Suppliers ATOMEX 2018 drew to a close in Moscow’s Gostiny Dvor. This year, 1670 participants from 31 countries attended the Forum. Over 84% of the participants were representatives of 860 supplier companies that took part in both business programme events and the exhibition. South Korea and Turkey had the largest delegations among foreign participants. 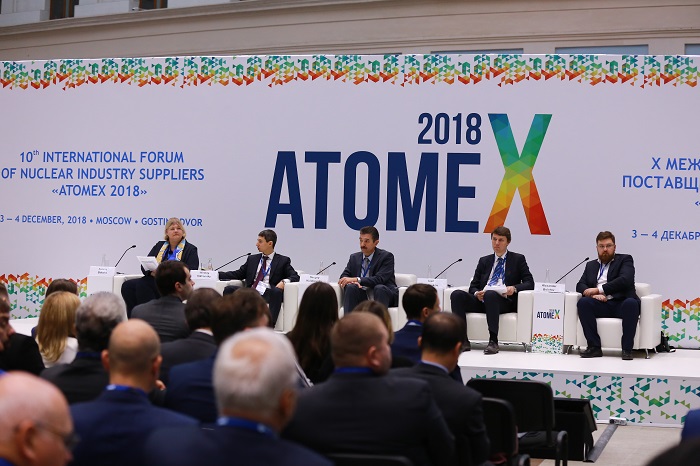 Speaking at the Forum’s opening, Director of the Department for Methodology and Procurement Organization at ROSATOM Inna Melchenko noted that “Over recent years, this forum has become a key platform for an open and constructive dialogue between suppliers and nuclear industry enterprises. Year in and year out, the exhibition features the best innovative products made in Russia and abroad. Business contacts are formed at B2B meetings and subsequently they flourish into the foundations of long-term relations. At round tables, we hold dialogues and open professional discussions. For ROSATOM, ATOMEX is a working venue that helps us effectively interact with our future and current business partners.”

Valery Seleznev, First Deputy Chairman of the State Duma Committee for Energy, emphasized that Russia’s nuclear industry holds an important place in the energy sector of Russia and globally. “Every year, Rosatom expands its presence abroad and holds the leading place in the number of projects currently being implemented. The portfolio of foreign orders is growing both quantitatively and qualitatively. Unlike other corporations, ROSATOM is able to offer a full range of services, from assistance in amending national legislation and selecting a site to disposal services. This is why we can say that ROSATOM is creating new sectors abroad. In this connection, it is crucial that the level of quality provided by its suppliers be preserved and developed,” Mr. Seleznyov noted.

Round tables, tracks and ROSATOM’s consolidated booth presented information on ROSATOM procurement programmes and the company’s key divisions. During the presentations, it was noted that, on average, more than 130 companies win ROSATOM’s tenders every day for worth over 2 billion roubles. Plans for 2019 entail holding tender-based procurement worth 975 billion roubles, which is 20% greater than this year’s figure.

At the round table “NPP Construction in Russia, Russian NPP construction abroad,” Vice President for Construction at JSC ASE EC (ROSATOM’s engineering division) Nikolai Vikhansky delivered a summary presentation. Among projects of particular attraction for suppliers, he listed Kudankulam NPP in India, El Dabaa in Egypt, Rooppur NPP and several others. “About 30 power plant units are now in the active phase, being either designed or built. These are major construction volumes and we are open to collaboration with our partners, suppliers and contractors,” Mr. Vikhansky stressed, stating that general construction and supplies of non-core equipment were in the greatest demand. “Naturally, we set requirements for potential suppliers. We would like to see specialized organizations, organizations that are capable of raising their own financing, organizations with the relevant experience and qualifications, and organizations that have been audited,” he concluded.

The Forum addressed such pressing issues as financial instruments for supplier support; increasing the management efficiency of equipment supplies through the development of the Production System at supplier companies; and standardization and unification of NPP equipment. The Forum included workshops on “How to Become a Nuclear Industry Supplier” for Russian and foreign companies and presentations of the e-trading platforms that ROSATOM and its organizations use to make their procurements: Fabrikant, B2B-Center and Roseltorg.

ATOMEX 2018 featured a special area for individual B2B meetings. A total of 17 individual meetings between suppliers and representatives of ROSATOM’s divisions and enterprises were held at the Forum. Throughout the Forum, foreign participants were offered technical tours of CNIITMASH (Moscow) and Leningrad NPP-2, which is currently under construction.

PJSC Sovcombank acted as the general sponsor of the Forum, and Alfa Insurance Group was the partner of the business programme. The Forum was organized and operated by ATOMEXPO LLC.