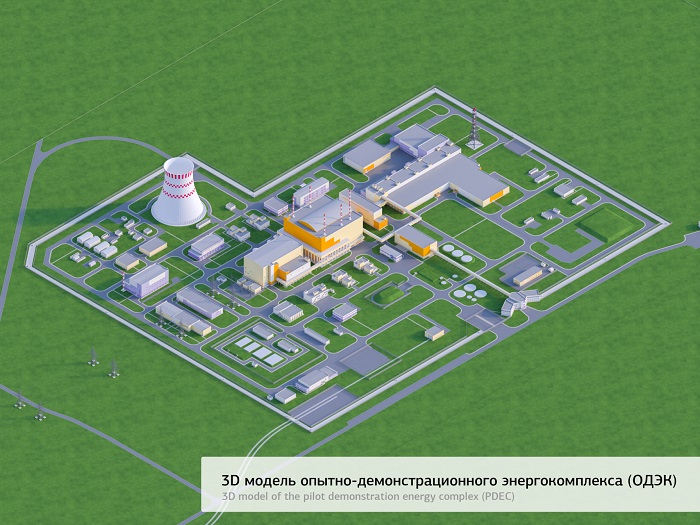 The total contract value is 26.3 billion rubles. The contractor will accomplish construction of reactor hall, turbine hall and related infrastructure facilities of the power plant. The completion is scheduled till the end of 2026.

“Contracting for BREST-OD-300 reactor facility and power unit construction is the major long-anticipated milestone of “the Breakthrough” project implementation in 2019. After commencing the works for the fabrication/refabrication facility, we are moving further to construction of the key facility of PDEC which should become the prototype of the nuclear power of the future. Besides, construction and operation of PDEC facilities would create over 800 new jobs in Seversk,” commented Vitaly Khadeev, Vice President for Development of Closed Nuclear Fuel Cycle Technologies and Industrial Facilities at TVEL JSC.

A 300 MW plant powered by the innovative fast reactor is  the key facility of the Pilot Demonstration Energy Complex (PDEC), which is in process of construction at the Siberian Chemical Plant, as a part of the strategic Russian nuclear project “Proryv” or “the Breakthrough”. In addition to the power unit, PDEC will include an on-site closed nuclear fuel cycle with a facility for  fabrication/re-fabrication of mixed nitride uranium-plutonium nuclear fuel, as well as a spent fuel reprocessing facility.

TVEL Fuel Company of ROSATOM incorporates enterprises for the fabrication of nuclear fuel, conversion and enrichment of uranium, production of gas centrifuges, as well as research and design organizations. It is the only supplier of nuclear fuel for Russian nuclear power plants. TVEL Fuel Company of ROSATOM provides nuclear fuel for 76 power reactors in 15 countries worldwide, research reactors in eight countries, as well as transport reactors of the Russian nuclear fleet. Every sixth power reactor in the world operates on fuel manufactured by TVEL.  www.tvel.ru

TITAN-2 Holding  is a Russian group of engineering companies building nuclear facilities. The companies of the group provide a full engineering cycle from drawing the project documentation to commissioning of the facility. TITAN-2 Holding acts as the general contractor for construction of the new power units at the Leningrad Nuclear Power Plant. The companies of the group are also engaged in the projects of Hanhikivi NPP in Finland and Akkuyu NPP in Turkey.