The Investment Committee of ROSATOM has approved the project of modernization of the experimental shop-floor for nuclear fuel fabrication at the site of the Siberian Chemical Combine (SCC), an enterprise of TVEL Fuel Company of Rosatom in Seversk, Tomsk region (West Siberia). This will enable SCC to manufacture fuel assemblies with uranium-plutonium REMIX fuel matrix for VVER-1000 reactors.

In TVEL Fuel Company of ROSATOM, the Siberian Chemical Combine is the center of expertise for plutonium handling – this enterprise manufactures experimental fuel assemblies with dense mixed nitride uranium-plutonium fuel (MNUP fuel) for the BN-600 fast neutron reactor operated at Beloyarsk NPP. Modernization of this shop-floor will result in the launch of the new production line for assembling of VVER-1000 fuel rods and fuel bundles of TVS-2M model, including the installations ensuring multilevel quality control. REMIX fuel fabrication will be carried out in cooperation with the Mining and Chemical Combine in Zheleznogorsk, Krasnoyarsk region (East Siberia), which will produce uranium-plutonium fuel pellets. The project accomplishment is planned for 2023. 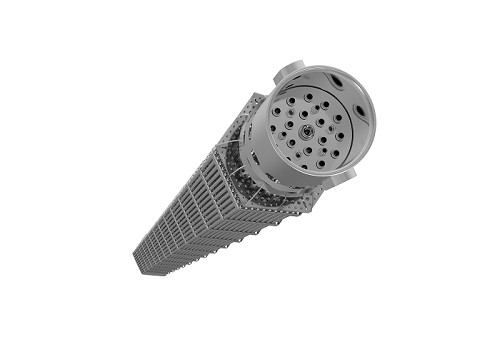 REMIX (regenerated mixture) fuel is Russian innovative product for thermal light-water reactors, which make-up the back-bone of the modern nuclear power industry. Its fuel matrix is made from a mixture of reprocessed uranium and plutonium, extracted from spent nuclear fuel, with addition of small volumes of enriched uranium. Distinct from uranium-plutonium fuels for fast reactors (such as MNUP and MOX fuel), REMIX fuel has low plutonium content (up to 1.5%). Its neutron spectrum does not vary from common LWR fuel with enriched uranium, therefore, fuel assemblies behavior in the reactor core and the amount of plutonium bred from uranium due to irradiation are generally similar. For NPP operators, this means that, in perspective, REMIX fuel may be introduced without any changes in reactor design or additional safety measures. Introduction of such fuel would enable to boost exponentially the feedstock for nuclear power plants due to closing the nuclear fuel cycle, and also to recycle spent nuclear fuel instead of its storage.

Since 2016, three TVS-2M fuel assemblies, each containing six experimental REMIX fuel rods (among the total 312 rods in one fuel bundle), have been undergoing pilot operation program at unit No. 3 of Balakovo NPP in Russia. In 2020, the third 18-month cycle of their irradiation started.

“The bundles with the experimental REMIX fuel rods have successfully completed two micro-campaigns and continue the full irradiation cycle. The next step should be loading of full-fledged REMIX fuel assemblies in a reactor. For this purpose, it is planned to launch fabrication of such fuel at the Siberian Chemical Combine, the capacity of this production line will be sufficient to manufacture experimental REMIX fuel bundles for pilot operations in required numbers. This is the first stage necessary for testing the technology, afterwards it will be possible to consider creation of industrial batch production facility of REMIX fuel in Rosatom. These prospects also depend on the results of the pilot operation of the REMIX fuel produced in Seversk”, commented Alexander Ugryumov, Vice-President for Research and Development at TVEL Fuel Company of ROSATOM.

TVEL Fuel Company of ROSATOM incorporates enterprises for the fabrication of nuclear fuel, conversion and enrichment of uranium, production of gas centrifuges, as well as research and design organizations. It is the only supplier of nuclear fuel for Russian nuclear power plants. TVEL Fuel Company of Rosatom provides nuclear fuel for 73 power reactors in 13 countries worldwide, research reactors in eight countries, as well as transport reactors of the Russian nuclear fleet. Every sixth power reactor in the world operates on fuel manufactured by TVEL. www.tvel.ru
August 26, 2020